HomeIndiaUK Announces Plan for ‘Quantum Leap’ in Relations with India 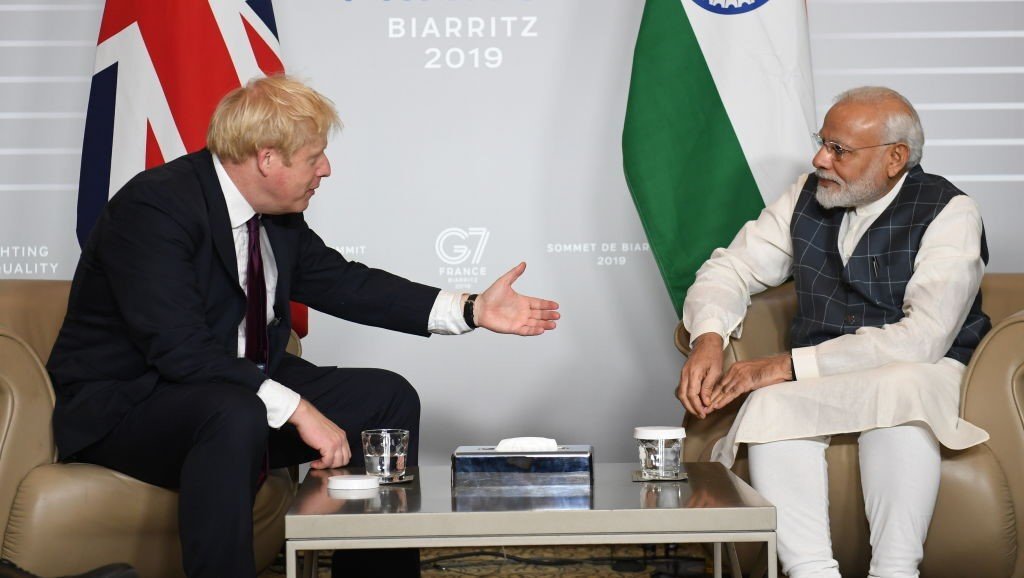 British Prime Minister Boris Johnson (l) is seen with Prime Minister of India Narendra Modi during the G7 summit on August 25, 2019 in Biarritz, France. In a video meeting May 4, the two leaders agreed to deepen ties between the U.K. and India over the next decade. (Stefan Rousseau – Pool/Getty Images)

LONDON — Britain said May 4 it’s agreed to increase cooperation with India in areas, including trade, science and health, as Indian authorities battle a surge in coronavirus infections that threatens to overwhelm the nation’s health care system.

Plans for a “quantum leap” in relations between the two countries were released after a video meeting between British Prime Minister Boris Johnson and his Indian counterpart, Narendra Modi.

Prior to the meeting, Britain announced 1 billion pounds ($1.4 billion) of trade deals with India, including an investment by the Serum Institute of India that will aid in the development of vaccines against COVID-19 and other diseases.

The two leaders agreed to deepen ties between the U.K. and India over the next decade, including plans to negotiate a free-trade agreement and double the amount of trade between the two over the next decade. A free-trade deal with India, the world’s sixth-biggest economy, would be a coup for Johnson’s government, which is trying to increase its trade with countries outside the European Union following the U.K.’s departure from the bloc.

Historic links between the U.K. and India have been highlighted in recent days as the British government and its citizens rushed to help a country struggling with shortages of oxygen, medicines and hospital beds amid a worsening coronavirus outbreak.

In the U.K., home to about 1.6 million people of Indian descent, many have been horrified by images of mass cremations and doctors struggling to keep up with rising numbers of critically ill patients.

“In the last week, the British people have stepped up in their thousands to support our Indian friends during this terrible time in a demonstration of the deep connection between the UK and India,” Johnson said after the meeting. “This connection will only grow over the next decade as we do more together to tackle the world’s biggest problems and make life better for our people.”

Also May 4, British authorities announced a deal with India to resolve longstanding migration issues. The agreement will make it easier for Britain to return Indian citizens who have no legal right to live in the U.K. The deal also opens up new pathways for young professionals to live and work in the two countries for up to two years.

The trade package includes a 240 million-pound ($332 million) investment in the U.K. by the Serum Institute, the world’s biggest vaccine-maker, that will support clinical trials, research and possibly vaccine production, the British government said. The Serum Institute, in collaboration with Codagenix, has started early-stage trials of a one-dose nasal vaccine against COVID-19.

Trade between the U.K. and India totals about 23 billion pounds ($31.9 billion) annually, less than 5 percent of Britain’s trade with the EU.

Britain added India to its “red list” of countries with high coronavirus outbreaks on April 23, banning arrivals for anyone from India except for U.K. citizens and residents. The move added to a sense of isolation and helplessness for many in Britain who feel cut off from their loved ones in India.