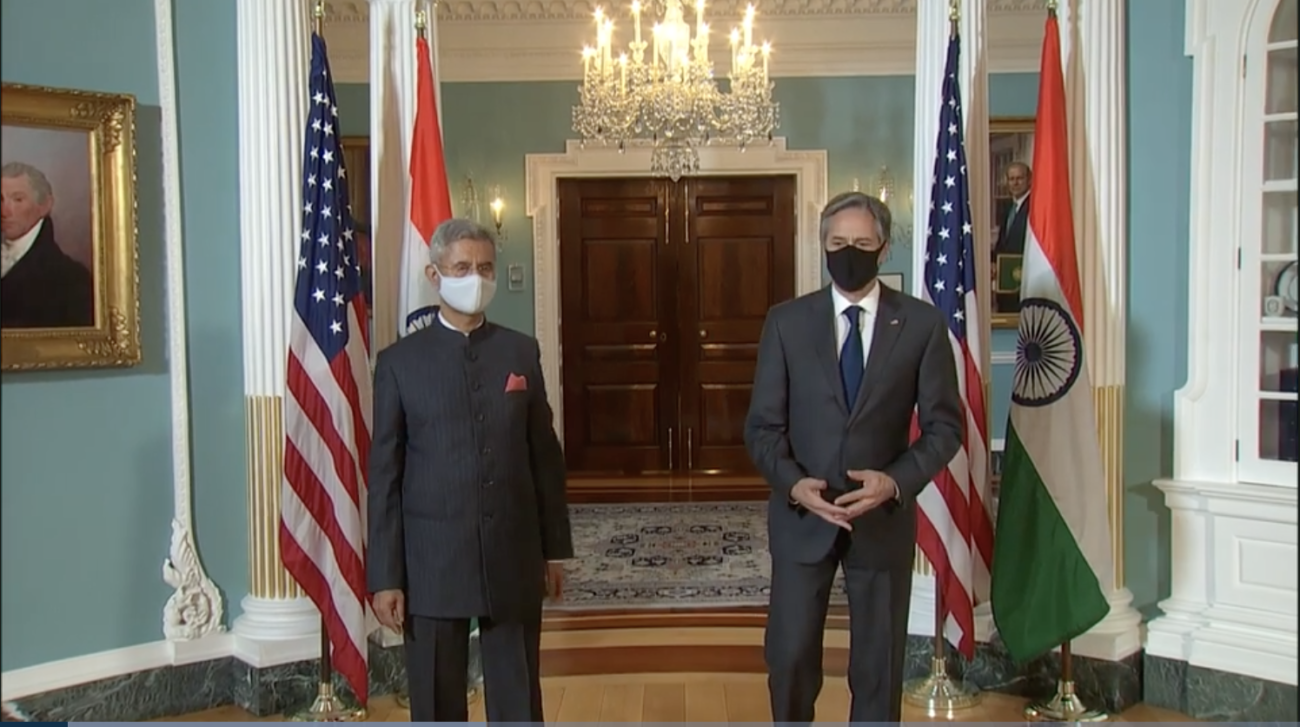 With Russia being a major arms supplier, India has been playing safe and not getting on board with the West with which it has major market ties and depends on for support in border conflicts. (State Department file pix)

WASHINGTON, DC (IANS) – President Joe Biden has expressed hope that India would be in “sync” with the US on Ukraine.

Asked at a news conference on Feb.24, if India, a major defense partner, was in “sync” with the US on Russia and Ukraine, Biden said, “We’re going to be”.

He added, “We’re in consultation with India today; we haven’t resolved that completely”.

Price said that “Blinken stressed the importance of a strong collective response to condemn Russia’s invasion and call for an immediate withdrawal and ceasefire” when discussing “Russia’s premeditated, unprovoked, and unjustified attack on Ukraine”.

Jaishankar tweeted afterwards, “Appreciate the call from @SecBlinken Discussed the ongoing developments in Ukraine and its implications.”

Biden unveiled a series of economic and strategic sanctions on Russia at his news conference declaring, “This is going to impose severe cost on the Russian economy, both immediately and over time”.

In retaliation for the Russian invasion of Ukraine ordered by Russia’s President Vladimir Putin, Biden said that the US and its allies would blunt Moscow’s ability to participate in global trade by cutting off its ability to use dollars, euros, pounds and yen.

As Russian forces attacked key sites in Ukraine and its troops entered that country and engaged with Ukrainian forces, Biden said: “Putin is the aggressor. Putin chose this war. And now he and his country will bear the consequences”.

Biden’s sanctions taken in coordination with its allies, target Russia’s banking sector, its hi-tech industries and its defence.

But Biden ruled out sending troops to help the Ukrainians, but said US forces would be going to NATO allies in the East.

Deputy National Security Advisor for International Economics Daleep Singh, who briefed reporters on the sanctions, gave an assurance that the US actions would not disrupt the global energy sector.

While primarily targeting the financial sector, the energy sector was exempted from sanctions, he said.

He said, “None of our measures are designed to disrupt the flow of energy to global markets. And we are now executing a plan in coordination with major oil producers and major oil consumers to secure the stability of global energy supplies”.

The Brent crude oil was trading above $101 barrel Thursday night.

Singh said that “no Russian financial institution is safe if the invasion proceeds”.

“We are ready to press a button to take action on the two largest Russian financial institutions, which collectively hold almost $750 billion in assets – or more than half of the total in the Russian banking system”, he warned.

In the first sanctions imposed by the US and its allies, the fifth-largest Russian financial institution, VEB that has more than $50 billion in assets, and the military-linked Promsvyazbank that holds $35 billion in assets have been blocked from any transactions with the US and Europe, he said.

India is facing a dilemma on how to deal with Russia, its longstanding friend and defense supplier, while its ties with the West are growing and it is getting more tied into the global economic situation.

New Delhi will be tested when a resolution against Russia is introduced in the Security Council by the US and its allies, and it will have to take a side.

India abstained on a procedural vote on the agenda proposed by the West at a Council meeting in January on Ukraine.

India’s permanent representative T.S. Tirumurti warned on Feb.23 at an emergency UN Security Council meeting, “The situation is in danger of spiraling into a major crisis. We express our deep concern over the developments, which if not handled carefully, may well undermine the peace and security of the region”.

Without naming Russia, he expressed “regret that the calls of the international community to give time to the recent initiatives undertaken by parties to diffuse tensions were not heeded to”.