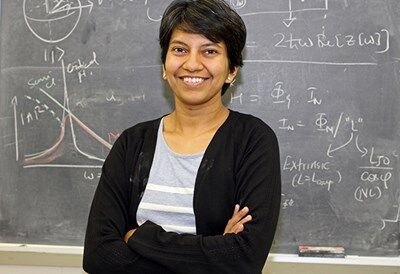 An Indian American physics professor and researcher at the University of Massachusetts at Lowell won a pair of early career development awards totaling $1 million for her quantum information processing with open quantum systems research.

The university reports that UMass Lowell’s Archana Kamal won the awards for her research in the emerging field from the U.S. Air Force and the National Science Foundation.

Quantum information processing is based on the principles of quantum mechanics, which mathematically describe the behavior and interaction of matter and light on the atomic and subatomic scale, the press release notes.

While computers encode data in the form of binary digits, or “bits,” which are a series of zeros and ones, quantum computers convert information into quantum bits, or “qubits.” A qubit, which is the basic unit of quantum information, represents a two-state, or two-level, quantum system, such as the up and down spin of an electron or the horizontal and vertical polarization of a photon, it said.

This is the reason why for more than a decade, tech giants like Google, IBM and Microsoft have been investing heavily in quantum computer hardware research, the Sun said.

The biggest challenge to realizing usable quantum processors is “decoherence,” the loss and erasure of quantum information due to strong interactions between qubits and the uncontrolled, “noisy” environment around them. This is the central issue that Kamal is addressing in her research, according to the report.

Aside from quantum computing, Kamal’s projects could lead to advances in quantum information processing applications and other innovative technologies, including quantum sensing, quantum communication and quantum cryptography (using quantum mechanical properties to store and transmit data securely), the outlet noted in its report.

Kamal was recognized by the Air Force Office of Scientific Research with a Young Investigator Program grant — worth $450,000 over three years — for her work on tunable quantum dissipation, which can be used to develop autonomous, quantum error-correction protocols, it said.

Kamal’s five-year NSF CAREER grant totaling more than $557,000 will support her research into the entanglement dynamics of quantum systems in the presence of non-trivial noise, the report adds.

The awards are the latest recognition for Kamal’s research. In 2018, she was named to MIT Technology Review’s prestigious annual list of Innovators Under 35 as a visionary.