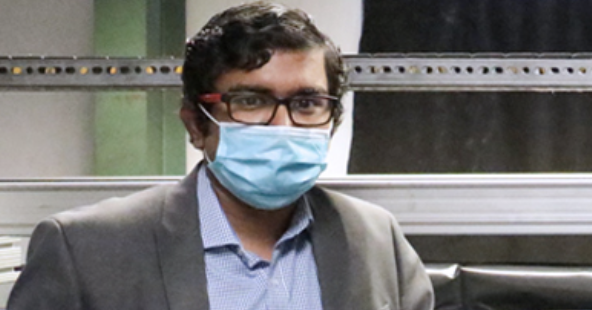 Indian American Samik Bhattacharya of the University of Central Florida was among five early career professionals at the university awarded by the National Science Foundation with a CAREER Award. (ucf.edu photo)

The University of Central Florida announced that five of its staff were honored by the National Science Foundation with CAREER Awards, including Indian American Samik Bhattacharya.

The recipients will share about $3 million over five years.

NSF uses the awards to recognize early career professionals with promising research who have the potential to serve as academic role models and lead their respective fields.

Working in a corner of a warehouse on UCF’s main campus, assistant professor Bhattacharya, of the College of Engineering and Computer Science, taps instructions onto a computer keyboard, which sends a do-it-yourself contraption sailing through a translucent tank full of water.

Suspended in the water is a piece of black material, which cuts through the turbulent water slightly bending as it moves, the university release notes.

“We can learn a lot from nature,” Bhattacharya said while students tweak a laser to better see what is going on in the water, according to the university. “The morphing wings of a giant manta [ray] glide effortlessly through turbulent waters. We want to learn the mechanics behind how the manta and dolphin maneuver to apply them to underwater vehicles so they can be flexible and fast,” he said.

If the mechanics can be cracked, unmanned water vehicles could be greatly improved. These vehicles are used by industry seeking out potential underwater gas and oil deposits, while some scientists use them to explore the deepest depths of the ocean floor. Militaries around the world also use these vehicles to detect and disarm or destroy underwater mines, the report adds.

“They are used when it is too dangerous for people,” the assistant professor continued. “But their use is limited because they are not very flexible, and they fail in turbulent waters. We are trying to make them highly maneuverable, which would make them a lot more useful.”

That starts with understanding the mechanics behind highly flexible and pliable things in liquid, such as the fins and tails of stingrays and dolphins. His lab includes computers that model these and other creatures’ flexible wings and fins. But the center piece is the custom-made water tank system and laser that helps him see how his tweaks to materials work in water.

The tank allows him to test the strips of material in calm and turbulent water, which his team controls from a computer station. His students run multiple tests in the tank and observe the bending dynamics on the computer screen. Sensors measure the forces and feed the data to the computer, according to the university.

Hands-on experience and experimentation are key to advancing the understanding of fluid dynamics and helping future engineers be ready for anything, Bhattacharya said.