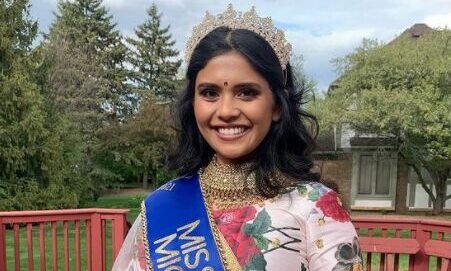 The 25-year-old from Michigan beat out Arshi Lalani of Georgia, who was named the first runner-up. Mira Kasari, of North Carolina, was the second runner-up in the beauty pageant.

In an Instagram post shared after her win, Dongre said she “strived to be a role model for young girls” while celebrating her rich South Asian heritage.

Dongre is a graduate from the University of Michigan and currently works as a business development manager. Born in India and raised in the U.S., she said she was “honored and humbled” to represent Indian immigrants living in the U.S. as the new Miss India USA, according to reports.

“This journey has been a whirlwind but at the root of it I have always strived to be a role model for young girls, celebrate my rich South Asian heritage and leave a lasting positive impact on my community,” she continued on Instagram.

In her post, Dongre thanked pageant producers IFC and Dharmatma and Neelam Saran, founders of the beauty pageant, for providing young women of South Asian origin with a platform to make an impact.

She also shared a note of thanks for her directors, her teachers, the other participants of the pageant and, finally, her parents.

“Aai and Baba– the values you inculcated in me and Vineet at such a young age have given me strength in times of hardship and light in times of darkness,” wrote Dongre.

Reports added that Dongre credited her parents for helping her stay in touch with her roots, noting, “Making sure that I learned the roots of where I come from: Marathi, Hindi, reading and writing, mythology, culture, food, love, spirituality, all whilst living in the US was no easy feat, thank you.”