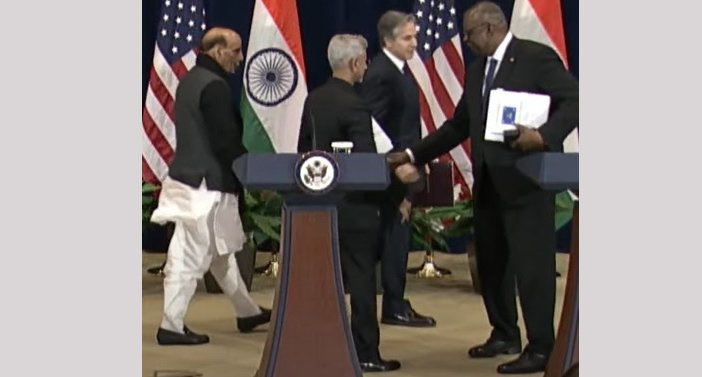 WASHINGTON, DC (IANS) – While differences on the degree of reaction to Russia’s invasion remained, India and the US focused at their dialogue of diplomatic and defense leaders on meeting what could turn out to be its catastrophic fallout: Food shortages affecting the poorest countries.

“An equally big worry which is emerging is of food security,” External Affairs Minister S. Jaishankar said on April 11at a news conference after the 2+2 meeting.

“There are concerns across geographies of societies who are importing wheat or sugar or other foodstuff out of the conflict region”, he said.

“Our countries are working together to try to bring more food to world markets, as well as to the World Food Program”, Secretary of State Antony Blinken said.

Jaishankar said, “A number of countries are discussing with us the possibility of greater food supplies, including the World Food Program,” he said.

“So we have discussed today – not just us, but I think the subject also came up in the virtual summit between Prime Minister (Narendra) Modi and President (Joe) Biden – about what could India do to stabilize the global economic situation,” Jaishankar said.

India has already started responding to the need for greater supplies of wheat and also to some extent sugar, he said.

Regarding the position of New Delhi on the invasion, Blinken said, “I would note India has made very strong statements in New York at the UN, the minister (Jaishankar) before the Indian Parliament, condemning the killing of civilians in Ukraine, calling for an independent investigation of these atrocities.”

India is providing significant humanitarian assistance to the people of Ukraine, especially medicines, he said.

Blinken said that Modi and Biden, who met before their 2+2 meeting, “had a very warm and productive conversation today in their virtual summit” and covered a lot of ground, including Covid-19, climate change, strengthening the global economy, the free and open Indo-Pacific.

Defense Minister Rajnath Singh and Defense Secretary Lloyd Austin participated in the fourth edition of the 2+2 Strategic Dialogue with Jaishankar and Blinken.

In a possible boost for the ‘Make in India’ program, Jaishankar said, “We discussed an Indian initiative called ‘Performance-Linked Initiative’ which would incentivize manufacturing in India, and I think it’s very much in American interest to support it.”

Regarding India’s energy needs, Blinken said, “We’ve dramatically increased our own energy trade with India, diversifying its energy sources. Our energy exports to India now total about $11 billion a year.”

But ultimately it will have to meet its energy needs from clean sources and honor the goals to beast climate change, he said.

“We are committed, for our part, to partnering in India’s clean energy transition, and this needs to be a partnership. We have a responsibility – a historic responsibility as well as a current responsibility,” he said.

“We’re very lucky in the United States to be home to some 4 million Indian Americans, as well as 2,00,000 Indians studying in our universities”, he said.

A Working Group on Education and Skill Training was formed on April 11 that will increase the number of students by bringing institutions in the US and India together to develop new joint research and exchange programs, he added.