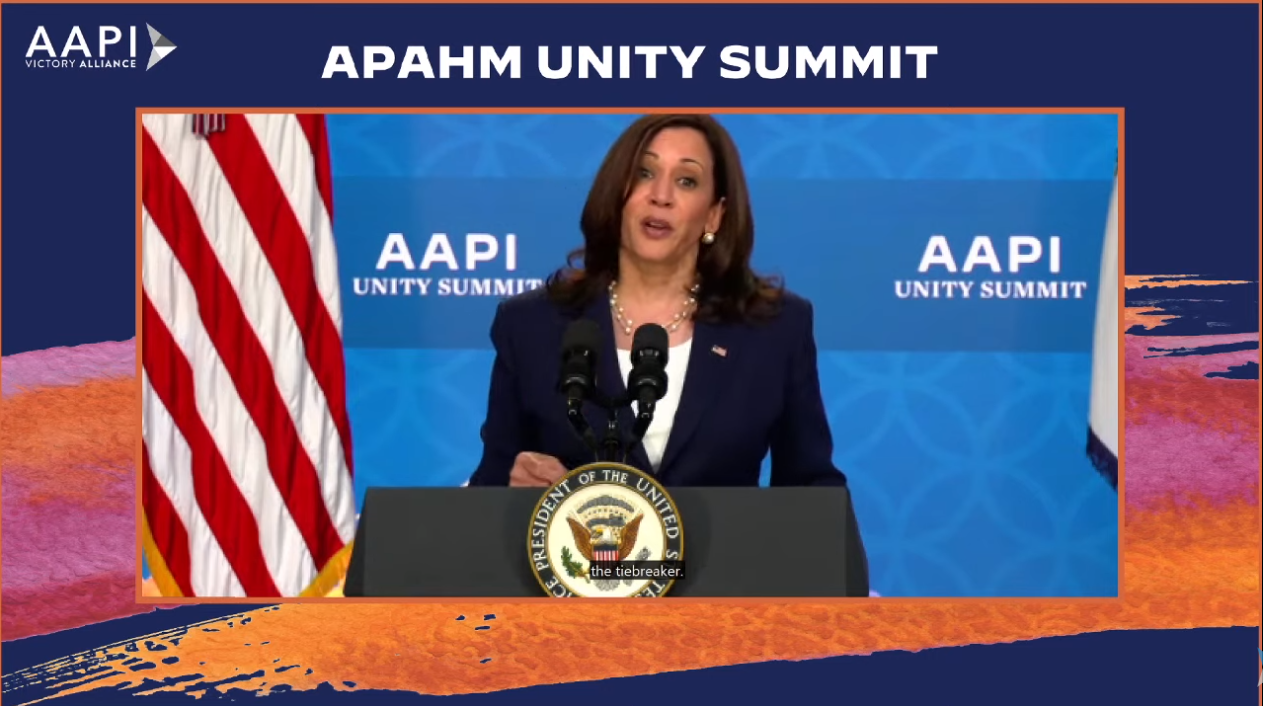 Vice President Kamala Harris kicked off the launch of the AAPI Victory Alliance May 19, noting that the U.S. has a unique opportunity to reshape itself post-pandemic. “The work of the AAPI Victory Alliance is so important. It is the work of mobilizing our AAPI community, strengthening the community, and strengthening our democracy,” said the Indian American vice president. (Zoom screen grab)

Vice President Kamala Harris May 19 kicked off the launch of the AAPI Victory Alliance — formerly AAPI Progressive Action — noting that the nation has a unique opportunity to reboot.

“As we emerge from the pandemic, I believe we are at the start of a new era, with a unique opportunity to reshape our nation’s future, to transform how we live, how we work, and how we vote,” said the Indian American politician, the country’s first female vice president. “We have the opportunity to shape how we live together as one nation built by many.”

In her remarks, Harris gave a shout-out to AAPI Victory Alliance chairman Shekar Narasimhan, who earlier introduced the vice president.

The vice president noted the alarming spike in anti-Asian violence which has beset the nation. Over 6,600 incidents of racist speech and physical violence motivated by race have been reported via the web portal Stop AAPI Hate, which accepts reports by individuals in several Asian languages, including Punjabi, Hindi, and Urdu. Community activists believe the dramatic rise in anti-Asian American violence can be attributed to former President Donald Trump, who repeatedly attributed the coronavirus to China, referring to it as the “Chinese virus,” “Kung Flu,” and other objectionable names.

Harris noted that two out of three incidents were perpetrated against Asian American women, and added that — based on her experience as the former attorney general of California — she believes such crimes are underreported.

“Asian Americans have the right to be recognized as Americans, not as others, not as them, but as us,” she stated, adding: “A harm against any one of us is a harm against all of us.”

A day before the AAPI Victory Alliance summit, the House, in a rare show of bipartisanship, overwhelmingly passed the COVID-19 Hate Crimes Act, which provides resources to the Justice Department and local law enforcement to combat and review incidents suspected to be motivated by race. The bill had earlier been passed by the Senate on a 94-1 vote. Harris said at the summit that she expected President Joe Biden would sign the bill, and a day later, he did.

Clinton said she was proud of the bipartisan victory on the bill, and noted that over half of Asian Americans say they have experienced some form of hate. “I hope this difficult period is a motivator, especially for young people, to speak out against injustice. American history is replete with immigrants finding their voices after facing oppression.”

Hirono said she was heartened to see so many disparate groups coming together to address violence against the AAPI community. “The AAPI community has suffered disproportionately during this pandemic,” she said, noting that much of the community are frontline workers who have been risking their own lives as they worked during the lockdown.

Harris spoke of the need to reduce the costs of childcare and elder care, allowing women to meaningfully participate in the work force. She also spoke of the need to shore up voting rights, and noted there are currently 360 bills attempting to retract the vote by mail option. More than two-thirds of Asian Americans voted by mail in the last election.

In a discussion moderated by AAPI Victory Alliance executive director Varun Nikore, Clinton and Verma discussed the unprecedented rise in voter engagement and participation during the 2020 election cycle. AAPI voter turnout shot up by 46 percent.

“The AAPI community really showed its power in the last election. It’s really great to see that the AAPI Victory Alliance will continue to beat that drum,” said Clinton.

Verma, who was the first Indian American ambassador to India, serving during the Obama Administration, lauded Clinton, his former boss, as one of the strongest allies for the AAPI community. He spoke about the need to disaggregate data into various Asian ethnicities, and advocated for more targeted, multi-lingual polling.

“Our community is interested in the issues of the day: the economy, how we will emerge from the pandemic, healthcare. So many people are still struggling to find a stable job,” he said.