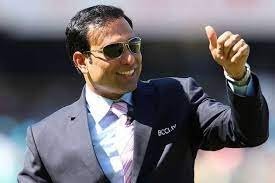 NEW DELHI, (IANS) – Former India cricketer and current National Cricket Academy head VVS Laxman likely to serve as India’s head coach on their two-T20I tour of Ireland in late June, in absence of Rahul Dravid, who will instead be in England with the Test squad.

The 49-year-old Dravid will assist in the team’s preparation for the rescheduled fifth Test from the tour last year as well as the limited-overs series in England. The red-ball squad will play a four-day game in Leicester from June 24-27, before they move to Birmingham, where the lone Test against England will be played from July 1-5.

India’s Test specialists are likely to leave for England on June 15, but Dravid will join the tour party after the conclusion of India’s five-match T20I series against South Africa on June 19 in Bengaluru.

Laxman, who is currently the director of cricket at the NCA in Bengaluru has earlier been involved in coaching capacities with Sunrisers Hyderabad in the IPL and Bengal in the Indian domestic circuit as a batting consultant. The batting legend was also part of the support staff group with the India Under-19 World Cup-winning team in the Caribbean.