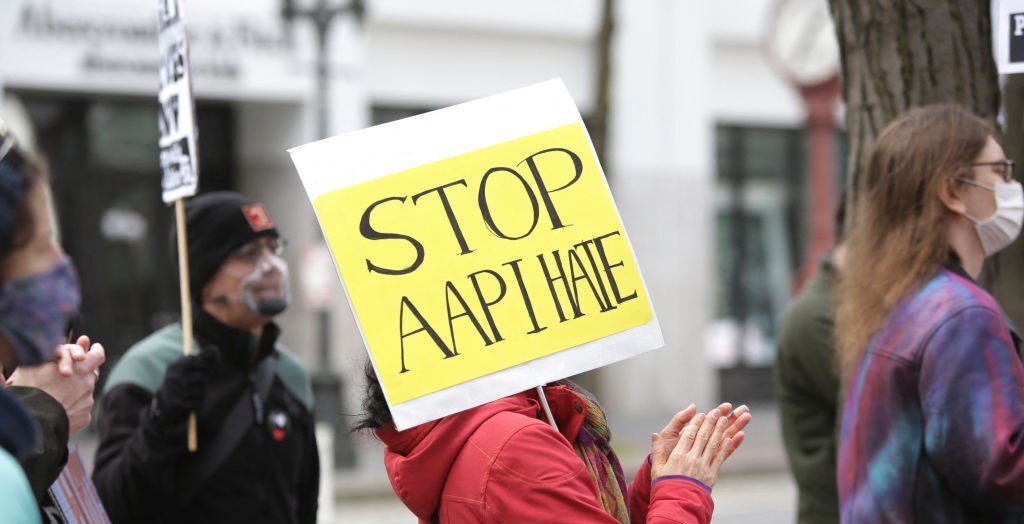 A demonstrator holds a sign calling for a stop to hate against Asian Americans and Pacific Islanders during a national day of action against anti-Asian violence in Seattle, Washington, on March 27. The South Asian Journalists Association released a statement May 7, advising reporters and media outlets against using the term “India variant” or “Indian variant.” (Jason Redmond/AFP via Getty Images)

Community activists fear that Indian Americans could increasingly be targets for hate crimes as U.S. media and social media identify the B.1.617 double mutant variant first identified in India as the “India virus.”

The site allows victims to self-report hate-based crimes in several languages, including Hindi, Punjabi, and Urdu.

Manjusha Kulkarni, Indian American co-founder of Stop AAPI Hate and executive director of the Asian Pacific Policy and Planning Council, told India-West she would not be surprised to see a backlash against Indian Americans as the term “India virus” makes its way into the U.S. lexicon. “The language and verbiage that’s being used creates racial animus against individuals,” she said.

The B.1.617 variant was first identified in Maharashtra last October. The double mutant variant is a combination of the L452R mutation found in the California variant, as well as another significant spike mutation, E484Q, similar to mutations found in variants from South Africa and Brazil.

The B.1.617 variant is believed to be responsible for India’s crushing second wave, with numbers as high as 400,000 daily new infections and 3,000 daily deaths. The variant has spread to 40 other countries, including the U.S.

On Twitter, U.S. and U.K. residents blamed the “India virus” for another possible lockdown. “If the cockwobble had closed the f*****g airports and stopped allowing people to fly in from India we wouldn’t have to listen to his s***. Just sounds like he’s going for another lockdown but blaming the India virus,” read one tweet, blaming U.K. Prime Minister Boris Johnson for mishandling the pandemic.

“India triple mutant virus, your country and government suck. The whole world is recovering, but India virus are spreading out like crazy….Take the vaccine for f**k’s sake,” read another tweet.

“Public returning from India not following the quarantine rules are to blame for India virus reaching U.K.,” read another tweet.

Newspapers and wire services are also using the term “India virus,” rather than identifying the variant by its scientific name. “India Virus Variant Identified in Two Southeast Iowa People,” read a headline released May 4 by the Associated Press.

The South Asian Journalists Association released a statement May 7, advising reporters and media outlets against using the term “India variant” or “Indian variant.”

SAJA noted that the World Health Organization in 2015 issued a guidance which warns that the naming of diseases, viruses or variants after the countries from which they originate could stigmatize the people living there.

Instead of using the label “the South Africa variant,” for example, the AP Stylebook suggests using “the variant first detected in South Africa” as an alternative.

Kulkarni shared incidents of Indian American harassment reported to Stop AAPI Hate. A New Hampshire resident reported: “A neighbor kicked on our apartment’s door, screaming racial slurs (“towel head”), insults and abusive language. She threatened us to ‘Take it to the streets.’”

A Washington state resident reported: “My 7 year old daughter was approached by another girl of the same age, blond, shoulder length hair, bluish eyes. The conversation started out innocently about playing in lakes.”

“Then the blond girl asked my daughter if she jumped into a lake in India and swam all the way to the U.S. She asked her where she came from and if she should go back. My daughter was visibly upset and responded with ‘Why would you ask that? I was born here.’”

A resident from Seattle, Washington, reported: “A man insulted me on the bus saying that I was selfish for being in America eating at Whole Foods because I should be in my own country because it’s very poor and needs skilled people like me.”

“He said that we Indians were smart but very selfish and that we should be helping our own country and not the USA.”

And in a situation many Indian Americans have faced, a resident of Oakland, California, reported: “When people find out that I’m Indian online they will start pretending to be tech support or make racist jokes about Indian kids starving.”