HomeEntertainmentCinemaWith Dignity and Soulfulness Jubilee Kumar Got His Hits

With Dignity and Soulfulness Jubilee Kumar Got His Hits 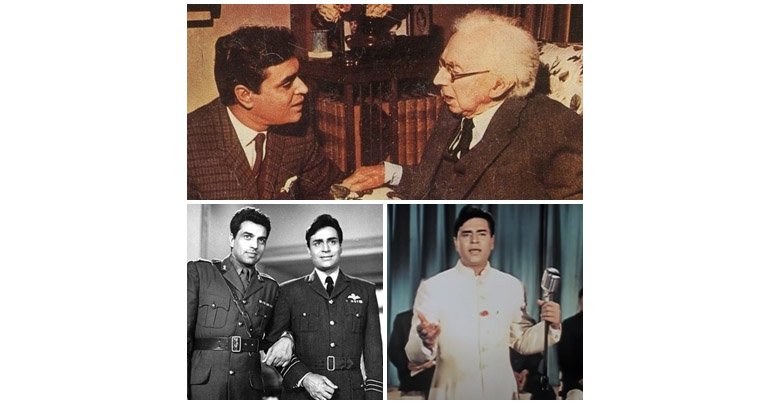 With Dignity and Soulfulness Jubilee Kumar Got His Hits

He did not possess Dilip Kumar’s brooding intensity, Raj Kapoor’s artful naivete, or Dev Anand’s jaunty insouciance, but still went on to carve a successful presence in the Hindi film industry.

With his innate air of restraint and dignity, soulful, expressive eyes, and quivering lips, Rajendra Kumar made tragic roles — of the stoic hero, the wronged but dutiful son, the silent suffering suitor — his special forte.

With his appearance guaranteeing a hit in the tear-jerkers that were — and still are — a staple of Indian films, it is no wonder he was nicknamed “Jubilee Kumar”, or even less charitably, “The Poor Man’s Dilip Kumar”. But Rajendra Kumar, who would have been 95 on July 20, proved he was not limited to melodrama.

He went on to perform in a successful costume swashbuckler, essaying characters with shades of grey and even black, an Indian Air Force officer, among many others, in a nearly four-decade-long career. And then there is the help he gave to Dharmendra, Manoj Kumar, Feroz Khan, and even Rajesh Khanna in their fledgling careers.

But the high point of his film stint was the 1967 film “Aman”, possibly the first with a powerful anti-nuclear weapons stance, and marking the only appearance of the renowned British philosopher, pacifist, and Nobel Peace laureate, Lord Bertrand Russell in any film, Hollywood, or Bollywood.

As the story goes, Rajendra Kumar half-seriously suggested to producer-director Mohan Kumar that they approach Russell for the film, given its storyline, and despite the filmmaker’s misgivings, a letter was sent.

The Kumar’s were surprised to get a reply within 10 days, saying Russell was amenable, but due to his age, could not travel and was ready to give them an hour if they came to him in the UK. They did so, and he was so taken in with the experience that he freely gave them many more hours of his time.

“Aman”, shot in the UK and Japan, and pairing our hero against Saira Bano, playing a Japanese doctor, while Balraj Sahni and Chetan Anand, played their respective fathers, was not that successful in India, and the appearance of the great philosopher — unfortunately dubbed in the film — also did not make that many waves.

It was, however, a milestone in Indo-Japanese relations, and much more popular across the Middle East, from Iran to Egypt, making Rajendra Kumar a most recognizable face in the region. And then, it has one of the most candid scenes ever seen in Hindi films — a son asking his father for a cigarette, and Sahni carried out the scene with aplomb.

“Aman” also marks possibly a rare appearance of ghazal maestro Jagjit Singh (albeit still turbaned) in a group of friends that greet Dr Gautamdas (Rajendra Kumar) on his return with Jagjit giving him a ‘jhappi’ and lifting him up in his enthusiasm. Naseeruddin Shah, too, made his film debut in ‘Aman’ — as an extra.

And it made the government ban filming on New Delhi’s Rajpath, the scene of the annual Republic Day parade.

Rajendra Kumar once revealed that the climax — the funeral scene — was to be shot at India Gate, and the filmmakers inserted a newspaper advertisement asking fans to turn out with flowers. Millions did the next day, and the entire section of Lutyens’s Delhi was blocked, even stopping the movement of Prime Minister Indira Gandhi.

She asked officials what was going on, and on being told it was a film shoot, ordered that no more filming be allowed there.

Rajendra Kumar Tuli’s tryst with the Hindi film industry was far from pre-ordained. Born on July 20, 1927, to an affluent family in Sialkot, where they lived in a six-story house with over 40 rooms, he saw them lose everything in the Partition and trudge empty-handed into India, first Amritsar, and then Delhi, to begin a new life from scratch.

He was interested in films but the onus of providing for the family was paramount and he was on the verge of taking up a job in the police, when a friend invited him to Bombay to join his ad agency. Though this did not prove successful, Kumar managed to get a foothold in the film industry and made it out.

Having appeared onscreen in a couple of small roles, he was told by a director whom he was assisting that he would never be a star and he should stick to his work behind the camera. But he held on to his dream and his dedication, and his humility paid off. The break came when he turned down an exclusive contract with a leading production house, which promised to deliver a brand-new car at his doorstep the next day, in favor of working with the legendary Mehboob Khan.

“Mother India” (1957) brought him to public notice, though it was Nargis’s film all the way, and to some extent, Sunil Dutt’s, and “Goonj Uthi Shehnai” (1959), where he played a shehnai player (with Ustad Bismillah Khan doing the honors), was his first major hit.

And there is a special appearance in “Dharmaputra” (1961), which deals with Partition and majority communalism, in which he, reliving painful memories, makes a powerful pitch for harmony and peace with the song: “Yeh kiska lahu hai kaun mara.”

But there are more songs that are still popular — like the unparalleled exposition of love in “Mere mehboob tujhe, meri muhabbat ki qasam”, the playful “Tere pyaar ka aasra chahta hoon”, and the sombre “Mujhe teri mohabbat ka”.

Then, there is the three-way “Har dil jo pyaar karegaa”, the jeep-driving — which was as necessary for male heroes as being seated at piano was for heroines — “Kaun hai jo sapnon mein aayaa”, and. of course, “Baharon phool barsaao” — which till recently was the staple at Indian wedding videos, to signal the bride’s arrival.

By the mid-1970s, Rajendra Kumar knew how the wind was blowing and gradually moved away to character roles and sought to focus on making his son a star. Kumar Gaurav’s debut was encouraging, but he never could gain momentum.

That, and the industry’s growing indifference, hurt Rajendra Kumar — but true to his real and reel life persona, he never complained.