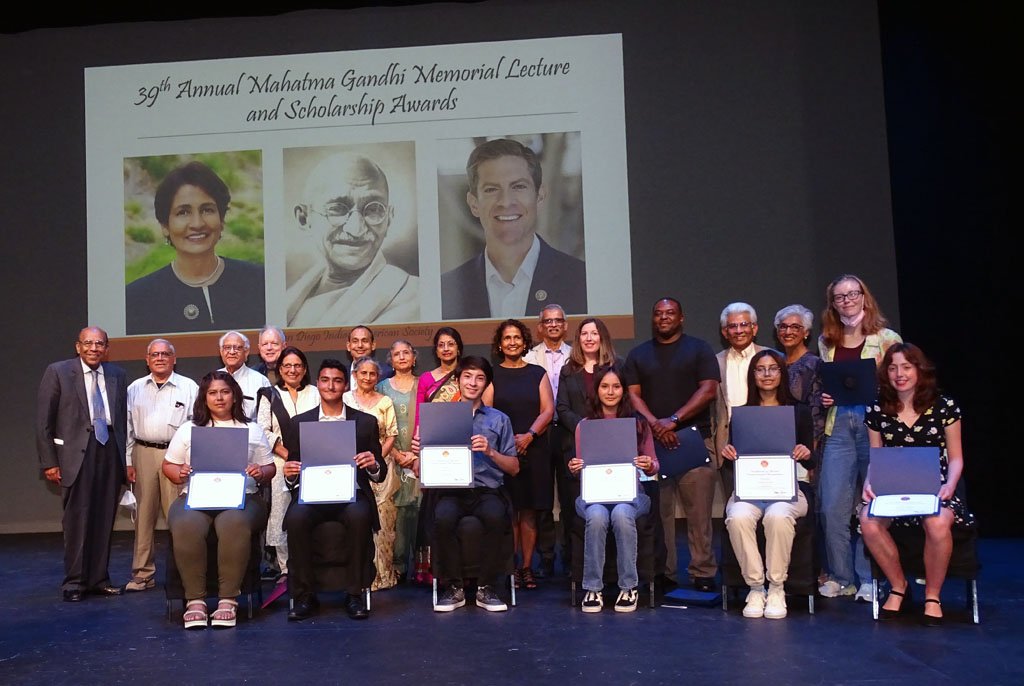 42 students were the recipients of the awards aimed at helping deserving candidates further their academic pursuits.

SAN DIEGO, CA – Dr. Suneta “Sunny” Cooke, President of Miracosta College delivering the 39th Annual Mahatma Gandhi memorial lecture exhorted the awardees to follow Gandhiji’s advice, “the best way to find yourself is to lose yourself in the service of others.”

Speaking on July 23, here, she said it had been her personal guiding principle. “I believe public service is the most admirable goal. I have found there is no greater reward than to make a difference in someone’s life, to open an opportunity where there was no hope, to make the world a better place, or to make something work better for someone. Allyship – to stand with and for someone and to lend your voice, your credibility, your power, to their cause/to their need,” she said.

Cooke is not only a distinguished educator and higher education administrator but also a major contributor to workforce development. She has served as the President of MiraCosta Community College District since 2015 and has been an educator since receiving her Ph.D. in Biology from Georgetown University. Dr. Cooke has worked at local and state levels in economic and workforce development in Texas and California.

Professor Madhu Madhavan, Founder and Executive Director of the San Diego Indian American Society (SDIAS) briefly reviewed the organization’s history and said it has so far awarded over $1.3 million in Mahatma Gandhi scholarship grants to about 600 outstanding high school graduates and over 130 Community College students.

This year 42 outstanding high school graduates from 14 different high schools and four community colleges were given cash awards amounting to $100,000 and US congressional certificates from Congressman Mike Levin.

The SDIAS team of Professor Ramesh Rao, Hema Lall, Dr. Latha Sundar, and Manish Parikh, were all on hand to distribute the awards and thank supporters and volunteers.

For more information and to support the education awards: https://www.sdias.info/contact