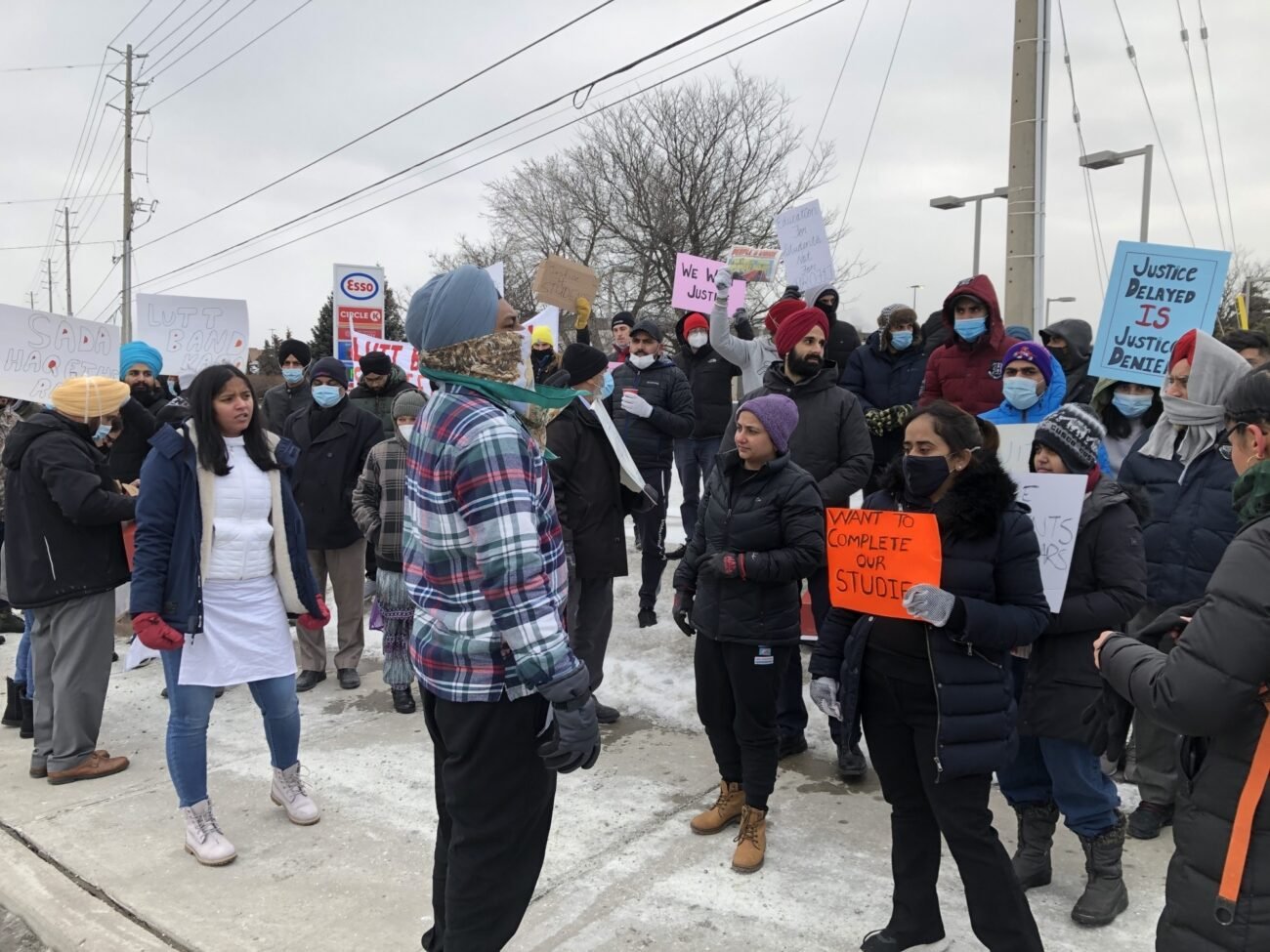 The students stage a rally in Brampton against the colleges that have abruptly declared bankruptcy and asking the Canadian government to step in. (IANS photo)

TORONTO (IANS) – Over 2,000 Indian students, who face an uncertain future after three Montreal colleges closed last month by declaring bankruptcy, have demanded intervention by the Canadian government to give them justice.

The CCSQ College, M. College, and CDE College had collected millions of dollars in tuition fees from these students before closing.

The students, many of whom have moved to different cities to stay with friends or relatives, say they have been scammed.

They are staging rallies to highlight their plight.

As some of the impacted students and their supporters raised slogans for justice at a rally in the Toronto suburb of Brampton on Feb.16, anxiety was writ large on their faces.

They shouted slogans seeking intervention by the Canadian government to help them complete their courses from other colleges.

Those who were nearing completion of their courses must be allowed to finish on the basis of their old credits, they demanded.

Many said they are running out of money as they cannot legally work for 20 hours a week – as allowed to international students.

Manpreet Kaur, a student from Longowal in Punjab, said she had deposited over $14,000 annual fee at M. College and was waiting to start her classes in early childhood education in January when the college declared bankruptcy.

“When I landed in Canada on Oct. 9, I was told that since the college couldn’t find enough students the classes would start in January. But on Jan. 6, students got an email about the college going bankrupt. It smacks of a scam,” said Manpreet who finished her master’s in computers in India before coming to Canada.

Vishal Rana, a student from Karnal who was studying at CCSQ college to become medical office specialist, said, “I had just four months left of my 16-month course when the college suspended studies. I don’t know where to go.”

Harwinder Singh, who came from Pehwa in Haryana to study a two-year business management course at M. College, said, “I deposited $21,500 for this course and I have finished only six months of my course. I am surviving on some money I saved while working. I don’t know what will happen.”

Gurkamaldeep Singh, a student from Moga, said he would have finished his business management course from M. College by June. “Now my biggest worry is whether I have to redo my course. We are told that the government has given the colleges to find buyers so that studies can resume.”

Gurkamaldeep said the students should be allowed to complete the remaining part of their courses at other institutions.

“We should give us course completion letters so that we can join other colleges and also apply for work permits in order to survive,” he said.

Over 700 students, who were taking online classes sitting in India, are among those who have been impacted by the closure of these colleges.