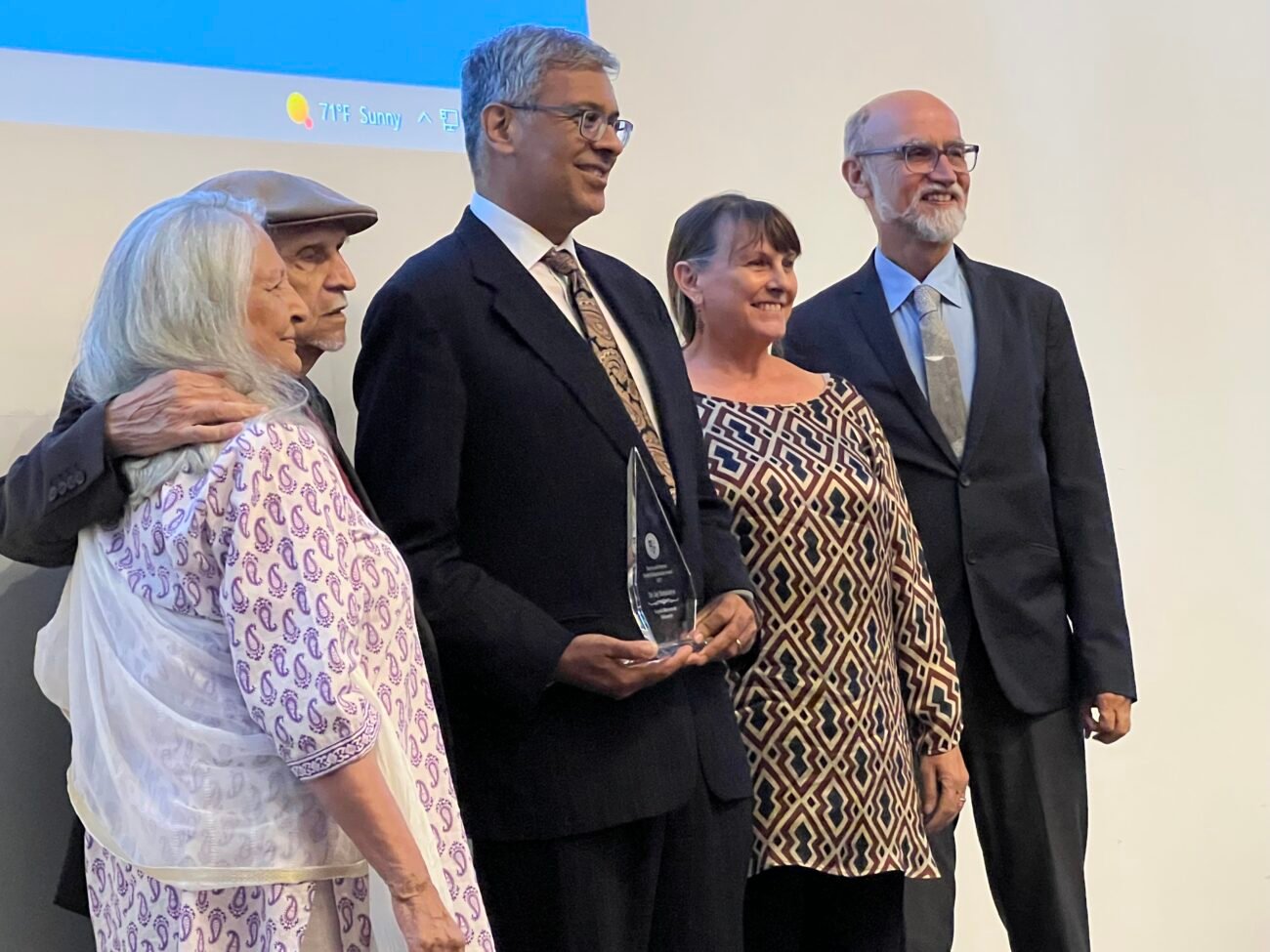 LOS ANGELES, CA – The evening started innocuously enough with the values of bridge building and moderation espoused in informed words by Dr. Navin Doshi and then went on to see not both but one side of an issue – in this case, covid related lockdowns and policies.

The occasion on September 13, at the Loyola Marymount University, was the annual reception and talk by the recipient of the year’s Doshi Family Bridgebuilder Award. Named for its benefactors, Navin and Pratima Doshi, the award is given annually to honor those dedicated to fostering understanding between cultures and peoples. Past honorees have included the likes of Thich Nhat Hanh, Vandana Shiva, Huston Smith, and Zubin Mehta.

The 2022 winner, Dr. Jay Bhattacharya, Professor at Stanford University’s medical school was recognized for his research on the deadliness of Covid and the ensuing effects of lockdown policies.

Bhattacharya has four degrees from Stanford including an MD, and a PhD in economics making him uniquely qualified to speak about the economics of healthcare and making him a bridgebuilder between academic disciplines. He brought the full force of his education and experience in his talk, ‘The Economic and Human Impact of the COVID-19 Pandemic and Policy Responses.’

He peppered it with global data and statistics that had formed the basis of what is known as the Great Barrington Declaration named after the town in MA, where he and two fellow researchers were hosted by a libertarian think tank. When it was first released in 2020 the study got support from the Trump administration and drew the attention of Fox News making Bhattacharya a recognizable face.

The central argument of the GBD at the height of the pandemic and reiterated at the event was this: governments should lift lockdown restrictions on young and healthy people who are the least affected by the virus, place protection measures for the elderly, and allow the virus to spread amongst those for who it will not be lethal, so there is herd immunity and no dependence on vaccines. Bhattacharya averred governments had instead used data to control populations, whereby lives had been lost but had starkly revealed the values practiced.

He pointed to the callousness toward the poor and drew attention to the horrific ‘Trail of Tears’ in India where migrant workers were made to return home and walked miles only to die in the scores on the wayside. Poor nations suffered he said, as they had to deal with hunger-related deaths caused by disruptions to the supply chain when the rich West simply shut down.

Children’s health had devolved too with necessary vaccinations for measles, polio, and the like being shafted aside for the covid related ones. By shutting down schools and depriving kids of proper education and interaction, a “generational theft” had occurred, he said.

The lockdowns, he concluded, were there to protect the hospital system, the rich, and the “laptop class” because they were the only ones who could afford to stay home. Zoom, he said, had caused the lockdown. When the tech had been unavailable people had just gone out and done their work.

Referring to the response he received for his research, which was not embraced by the scientific community, he said it was because so many had received funding from the NIH and were scared to go against the institution’s position. Bhattacharya claimed that till that point he had “never understood the link between research and funding.”

Up to this point, it seemed correct that the awardee had the podium and freely spoke about the work he was being recognized for. But the event then had Bhattacharya’s talk followed by Dr.Aaron Kheriaty who forcefully reiterated similar arguments terming the restrictions as being worse than what the “fascists and communists had dreamed of.” It was confusing – was the event about recognizing a person’s work or making a case?

Earlier, Doshi while leading up to the two presentations praised Bhattacharya for his boldness and said, “if western countries had let doctors remain autonomous and let them practice their profession during COVID, tens of thousands of lives would have been saved.”

The early part of his speech was interesting as he gave an arching, spirituo-historical perspective on bridgebuilding. The middle path of moderation practiced in India by the Buddha and as evidenced in the teachings of the Katho Upanishad and the Gita, influenced the pre-Socratic Greek thinkers, he said. The consequences of this path were huge, including the adoption of the principle of co-existence and avoidance of polarization. Doshi pointed out that nature exists in pairs of opposites which means, “there is some good in the worst of us and some bad in the best of us. The path for transcendence is to bring balance, harmony, and complementarity between the opposites.”

For the occasion, Doshi had also penned a poem, ‘Satyam Sivam Sundaram’ delving into the nature of the immortal soul and ringing out with the wisdom of the four Upanishadic mahavakyas. Set to music, it was rendered by Vijay Bhatt as an invocation at the top of the event. Doshi told India-West his readings and studying of texts over the years, including works by Aurobindo had revealed to him over and over again the strong connection between Quantum Mechanics and Advaita Vedanta and he e had penned the poem with thoughts of his last years and curiosity of  ‘what is after death?’

Also speaking briefly was Robbin Crabtree of the Bellarmine College of Liberal Arts of the Loyola Marymount University who expressed her gratitude to the Doshis and told the South Asian community, “you honor us with your engagement.”