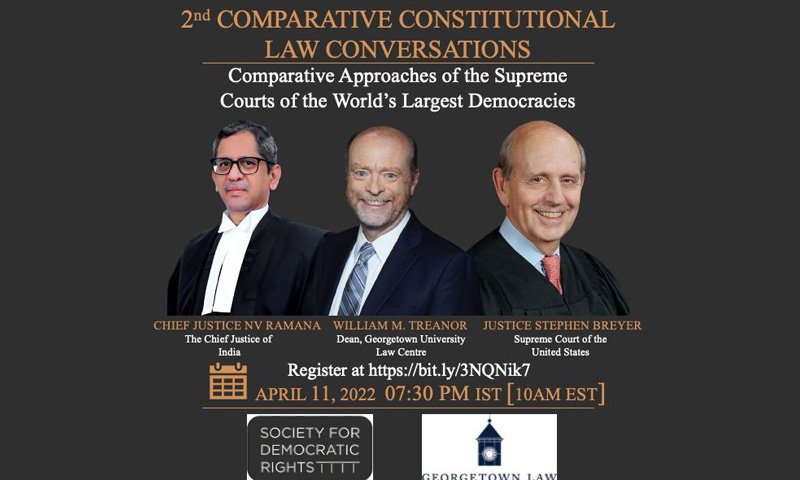 WASHINTON, DC -Ahead of his retirement in August, Chief Justice of India N.V. Ramana said he thinks that 65 years is too early an age for someone to retire, and also emphasized that people will trust judiciary only if it acts independently.

Ramana was speaking on April 11The Society for Democratic Rights, New Delhi and the Georgetown University Law Centre, Washington D.C. held the 2nd Comparative Constitutional Law Conversation Series webinar “Comparative Approaches of Supreme Courts of World’s Largest Democracies” along with US Supreme Court judge Justice Stephen Breyer, who is retiring in the next two-three months.

On retirement, Justice Ramana said: “Yes, I think 65 years is too early an age for someone to retire. In the Indian judiciary, at the time of joining we know our date of retirement. There are no exceptions. As for me, I am still left with decent amount of energy.”

Upon hearing the age of Justice Ramana and the fact that he was retiring in summer, Justice Breyer exclaimed: That is too young!

The Supreme Court Justice said “65 was too young to retire, a Judge must not think what he will do after retirement. When, I retire in this summer, I’ll be 83 years old and will certainly not be thinking of my next job as there is no provision of retirement in USA.”

Ramana said he agreed with Justice Breyer’s view that the “job of the judge is not political. Once we have taken oaths on the Constitution, once you start working as a judge, I think politics is no more relevant. It is the Constitution which guides us. This is the principle anywhere,” he said.

Ramana added that social and geographical diversity must find its reflection at all levels of judiciary, and with widest possible representation, people get to feel that it is their own judiciary.

Justice Breyer said, “See students who learned from US are contributing a lot to Indian Judiciary.” The Indian Chief Justice agreed. (with inputs from IANS)