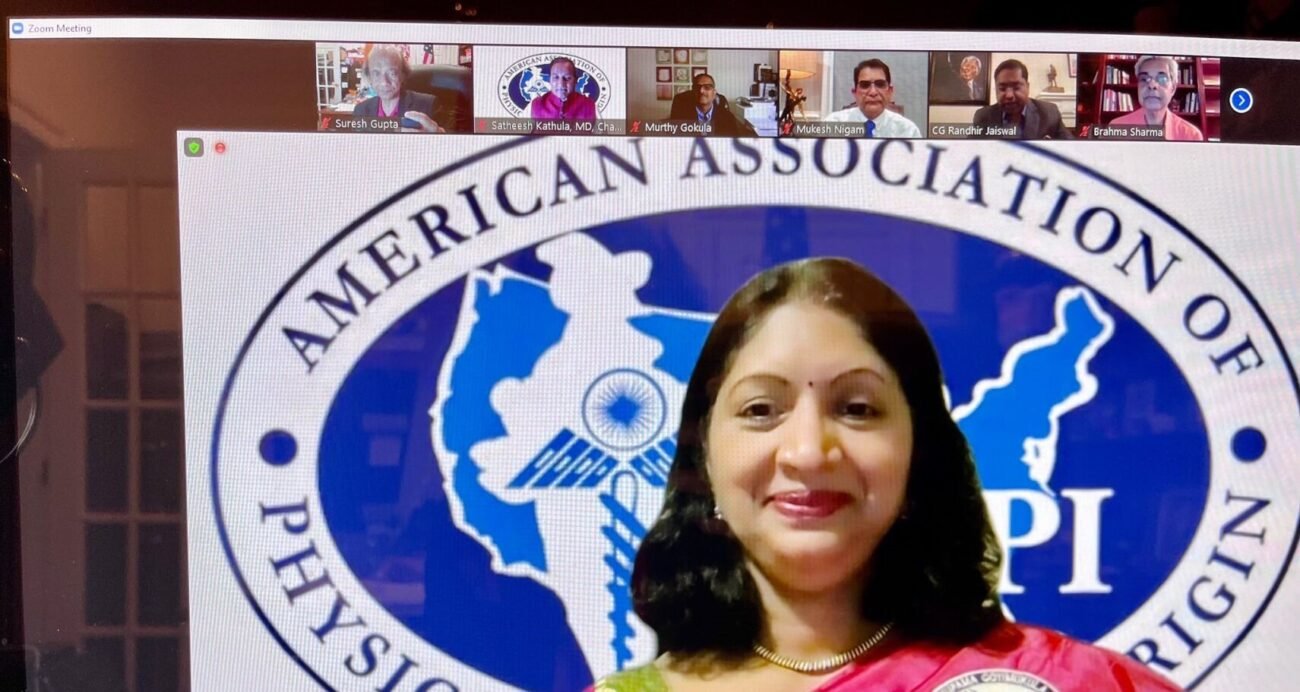 AAPI president Anupama Gotimukula at the launch of the “Adopt-A-Village” Project, urging Indian Americans to join the initiative. (photo provided)

The American Association of Physicians of Indian Origin Aug. 27 launched its Adopt-A-Village project, a rural health initiative in India, during a virtual launch event chaired by Dr. Satheesh Kathula, with Dr. Anupama Gotimukula, Dr. Jagan Ailinani and Dr. Ram Singh as members of the committee.

In a rare show of support for AAPI, the consul generals of Chicago, New York, Houston, Atlanta and the deputy consul general of San Francisco participated live during the launch of the initiative. Indian Ambassador to the U.S. Taranjit Singh Sandhu joined the meeting with his message and lauded the numerous efforts of AAPI for India, especially during the pandemic.

Gotimukula, Indian American president of AAPI, in her welcome address, said, “A lot of efforts is being put into this initiative, where AAPI in collaboration with Global TeleClinics, Inc., plans to adopt 75 villages in honor of 75 years of India’s independence, spread across the states of Andhra Pradesh, Gujarat, Karnataka, Tamil Nadu and Telangana, where the rural people of India will be offered free health screenings for anemia, DM (HbA1C), high cholesterol, CKD, malnutrition, kidney disease, obesity, and hypoxemia.”

In his opening remarks, Kathula, chairman of AAPI’s initiative, pointed out that India has nearly 700,000 villages, with the majority of the population having no access to safe drinking water and sanitation. “By adopting one village at a time and working with the government and NGOs, NRIs can make a difference,” he said, according to a press release.

Kathula referred to some of the programs in place in several rural villages, including supply of cloth masks, clean drinking water and free health care screening that has benefitted thousands of people across India.

Dr. Ravi Kolli, president-elect of AAPI, said, “While India has made substantial progress in health care as evidenced by the fact that life expectancy in India at birth now is 71 years, there are significant gaps and divergence in health metrics in different regions in India. India, thus, needs to redouble and continue its efforts and dedicate resources to tackle these perennial challenges. The post graduate training of physicians specializing in family medicine in every teaching institution will create motivated and well trained family physicians to address these deficits and deliver accessible, affordable, economical and continuous preventive and primary care to rural as well urban poor populations to raise health outcomes substantially all across India.”

Dr. Ram Singh said: “NRIs can adopt the village they hail from originally and make a significant contribution towards its development. There is a real will and desire on the part of governments, both at the state and the center to work with NRIs and NGOs to bring development to rural India.”

Gotimukula urged AAPI members “to consider joining this movement and adopt a village.” AAPI members/families can sponsor a village by emailing: aapipresident@aapiusa.org and info@aapiusa.org. For more details, visit: www. aapiusa.org