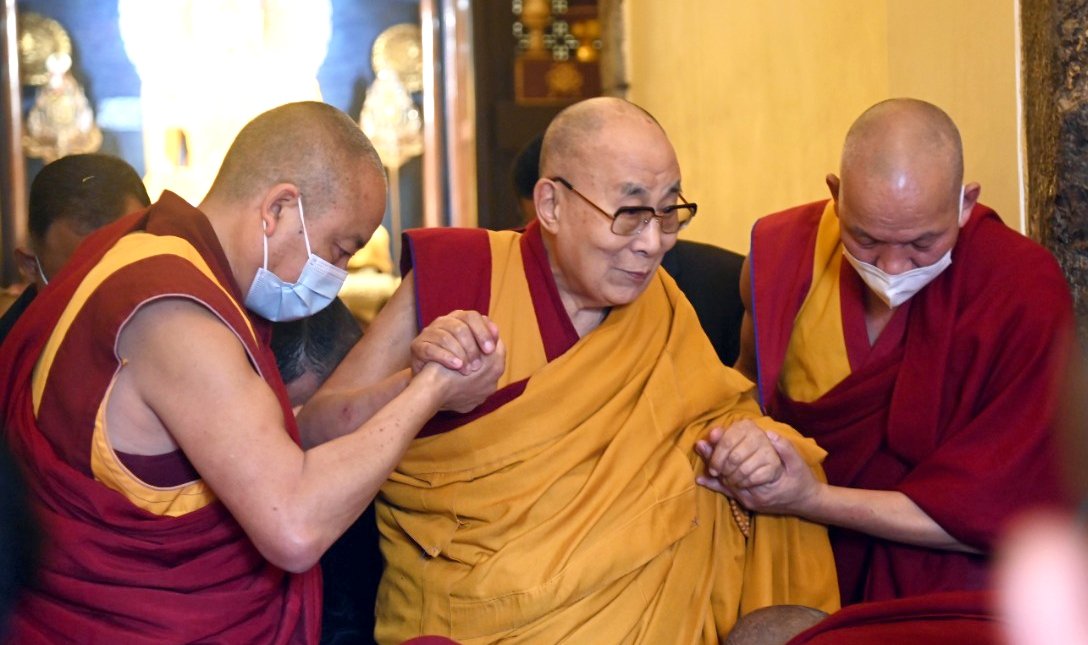 BODHGAYA – The Dalai Lama, Tibet’s spiritual leader, recently concluded a three-day speaking engagement at Bodhgaya, known as the ‘land of enlightenment’ that has attracted over 100,000 mainly Tibetans from across the world.

The huge response surprised the organizers, as the event coincided with the Indian media talking about a new wave of Covid sweeping the country.

According to police estimates, about 100,000 people converged at a large open field next to the sacred Mahabodhi Temple, where the ‘Bo’ tree under which Gautama Buddha attained enlightenment is located.

Tibetan writer and activist Tenzin Tsundue, who has lived in Dharamsala, the home of the Dalai Lama, for the past four decades, followed him to Bodhgaya. He said, “Not everybody can go to Dharmsala. But this space attracts you because you not only get to see the Dalai Lama and get his blessing; there is also the Bodhgaya temple. And it is surrounded by so many pilgrimage sites,” he said.

The Mahabodhi temple was declared a UNESCO World Heritage Site in 2002. Around the Mahabodhi temple complex are many temples depicting the diverse culture and architecture of Buddhist countries and communities, such as those from Thailand, Sri Lanka, Myanmar, Bhutan, Mongolia, China, Tibet, Nepal, Japan and Laos. Without a local Buddhist community in Bodhgaya (most of the population here are Hindus and Muslims), the monasteries here are dependent on foreign pilgrims for their upkeep.

The Dalai Lama’s visit has provided a much-needed fillip to pilgrim tourism here which had fallen due to Covid. The Bihar government constituted a committee to step in to help the monasteries.

Dalai Lama, now 87, arrived at the grounds in a golf cart and had to be assisted by two monks to walk to the stage and be seated. However, his mind seems alert, and so is his thinking faculty. He delivered a lecture of more than an hour each day without stammering.

At the back of the minds of many of the Tibetan devotees here seemed to be for how long they could hear his teachings and be in the vicinity of his charismatic personality.

Reflecting on the global attraction of Tibetan Buddhism and culture today and the fact that there were many non-Tibetans here, such as westerners, Vietnamese, Thais and many ethnic Chinese from Southeast Asia, Professor Geshe Ngawang Samten, vice chancellor of the Central Tibetan University in Sarnath in India, said that it is because of Tibetans not having a home of their own that its Buddhist traditions have spread far and wide.

Professor Samten also pointed to a special quality of Dalai Lama’s teachings that elicits worldwide appeal and admiration. “He attracts (attention) because he is very rational; his mind is very scientific,” he said.

“That is what people appreciate. He is not in favor of propaganda and propagation of Buddhism,” said Professor Samten. “Always he advises that don’t propagate it, do not convert other communities and people who are already within a religious kind of system. So that is his kind of attitude.”