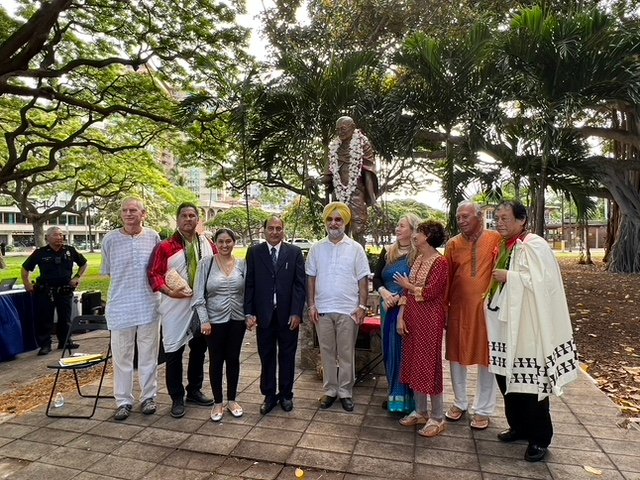 HONOLULU, HI – India’s Ambassador to the US, Taranjit Singh Sandhu, draped Hawaiian leis and lit candles at Mahatma Gandhi’s statue in Waikiki, here on July 9.  He was joined in making these traditional Hawaiian signs of respect by Indian Naval Attaché, Commodore Nirbhay Bapna, the Commanding Officer of the INS Satpura, Captain Saket Khanna, and other distinguished dignitaries who were in HI to take part in the annual RIMPAC naval exercise.

The program began with the Hawaiian blessing led by Dr. Terry Shintani, accompanied by traditional Hawaiian healers. The blessing was followed by Indian chanting led by Madana Sundari and Veda Das. Dr. Raj Kumar, of the Gandhi International Institute for Peace, which hosted the event, offered welcoming remarks and presented the book “Gandhi’s Wisdom for You” to Sandhu. The program closed with the Indian Navy Band performing the U.S. and Indian national anthems, as well as Mahatma Gandhi’s favorite song ‘Vaishnava Jana To.’

Sandhu, in his speech, spoke of Gandhiji as the “Father of the Indian Nation” and his legacy in the pursuit of peace. He told the audience, which included members of the local Indian community, that the cause of peace, and much more, is aided by close relations between India and the United States.