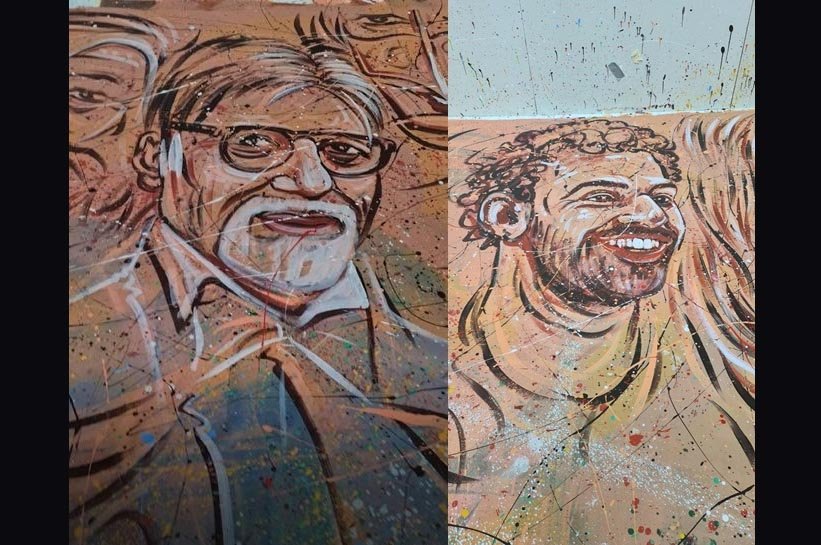 DOHA, (IANS) – Actor Amitabh Bachchan‘s portrait features prominently among a host of luminaries on the world’s largest-ever canvas painting, which is bidding to get into the Guinness book of records.

Besides Bachchan, portraits of a host of worldwide personalities drawn from various walks from the sports world to performing artists feature on the canvas paintings of Iranian artist Emad Al Salehi called the ‘Ball story’.

FIFA President Giovanni Infantino, along with current footballers Lionel Messi, Cristiano Ronaldo, Neymar, Karim Benzema, and past footballers like Ali Daei of Iran, late Diego Maradonna of Argentina, and Zinedine Zidane of France are those whose portraits find a prominent place on the canvas, which is equivalent to the size of a football field and will be formally unveiled at the University football grounds in Qatar.

The painstaking five-month artistic painting of Emad is all connected to the football game and will cover an area of 9600 square meters and tries to tell the story of the World Cup from its inception in 1930 until the World Cup Qatar 2022 through art.

“Sometimes I used to work for five hours and on some days for 14 hours,” said Emad, who has won several worldwide awards in the last 30 years, ten of which were spent in UAE.

He is not new to India and Indian culture having traveled and spent time in the commercial capital Mumbai.

“I know Indian cinema headquarters are in Mumbai, although I have not met Amitabh Bachchan in person, he is one of the top stars of the Hindi cinema that is what I know as I have seen a few movies featuring him,” said Emad, who knows and speaks a little bit of Urdu.

“I am going to Hyderabad city next year, to meet a few Indian artists from that city,” said Emad, who is looking forward to meeting Bachchan soon.

The artwork is supported by the Ministry of Culture, Qatar and more than 3000 liters of paint and more than 150 brushes were needed to complete it.

The largest art canvas presently stands against the name of Sacha Jafri of the United Kingdom which he achieved in Dubai, UAE on 29 September 2020.

Jafri’s canvas art centered around Journey of Humanity and was spread over an area of 1,595.76 square meters.