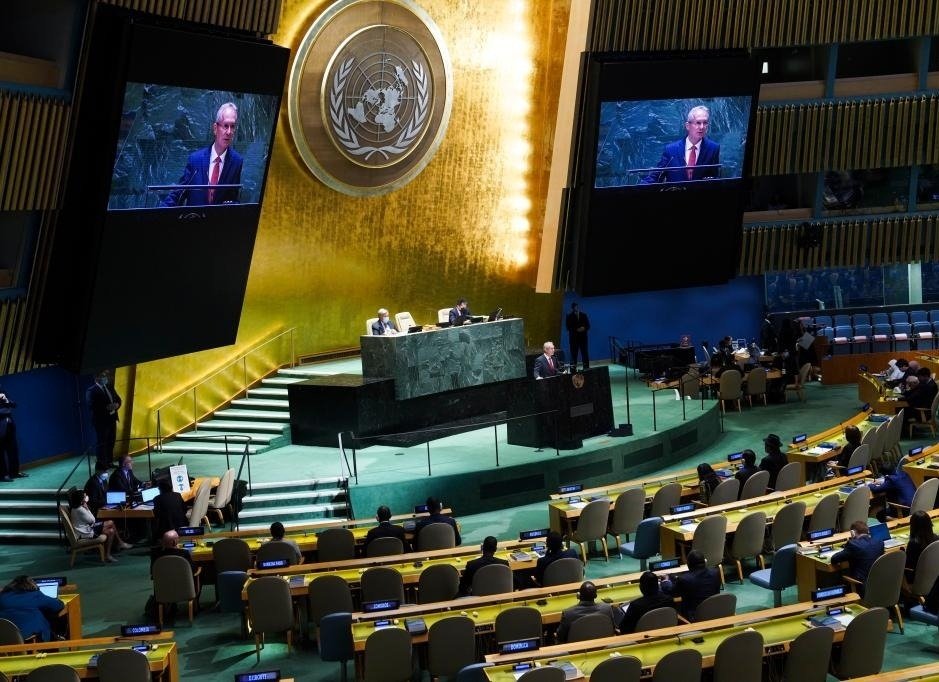 NEW YORK, NY (IANS) – While External Affairs Minister S. Jaishankar kept the world in suspense on how India would vote on the upcoming resolution in the UN General Assembly condemning Russia’s annexation of parts of Ukraine, New Delhi has voted with the West on three procedural matters.

When the Assembly met on October 10 morning to discuss the resolution it became embroiled in a controversy over whether the voting should be by secret ballot necessitating the procedural votes.

Russia which had launched a missile barrage on Ukraine a few hours earlier lost all the three votes.

The Assembly resolution condemning Russia’s annexation of four Ukrainian regions is expected to come up for a vote in the Assembly in a few days. It is nearly identical to the resolution that was voted by Russia last week in the Security Council.

India had abstained in the Council vote.

To preempt Moscow’s anticipated move to have the resolution decided by secret ballot in the Assembly, Albania proposed a motion to have an open vote.

Despite Russia’s objections, it was put to vote, and it was carried by 107 votes to 13, with 39 abstentions.

Russia then asked for another vote on the matter, which Assembly President Csaba Korosi ruled would be a vote to reconsider the motion for open voting that was approved.

But before it could be voted Russia’s Permanent Representative Vasily Nebenzia objected to Korosi’s ruling and his challenge was put to vote.

Showing Moscow’s isolation on Ukraine, it was defeated, getting only 14 votes, with 104 against it and 38 abstentions.

When the motion to reconsider, open voting was put to vote, it got 16 votes to 104 against with 34 abstentions, marking Moscow’s third defeat of the day.

When asked by reporters earlier in Canberra how India would vote on the resolution on Russia’s annexation of Ukraine territories, Jaishakar said: “As a matter of prudence and policy, we don’t predict our votes in advance.”

India joining the West against Russia on procedural matters is not necessarily a precursor to a change in New Delhi’s neutrality in voting on substantive matters involving Russia’s invasion of Ukraine.

As a diplomat pointed out, procedural votes are not on substantive matters and India had already voted with the West, once in the Council and another time in the Assembly, on the procedural issue of Ukraine’s President Volodymyr Zelensky addressing meetings remotely but abstained on resolutions condemning Moscow.

Unlike the Council, the Assembly does not have enforcement powers, but its votes carry moral authority.

In reaction to Moscow’s veto in the Council in February soon after the invasion began, the Assembly took up a similar resolution condemning Russia’s invasion of Ukraine and demanding it withdraw its troops.

It was passed with 141 votes, with India among the 35 abstaining.

The West is now on a mission to improve that tally in the vote this week.

Asking for a secret ballot, Nebezia said that countries were being unduly pressured to vote with the West and a secret vote would shield those who were against the resolution but could not publicly vote their intent.

During the debate on the resolution, Russia and Ukraine called each other terrorist nations, with Nebenzia citing the explosion on its vital bridge connecting it to Crimea, which it had annexed in 2014.

“Russia has proven once again that it is a terrorist state,” through the latest missile attacks which had endangered even his own relatives, Ukraine’s Permanent Representative Sergey Kyslytsya said. In a personal attack on the Russian diplomats, he said that the chamber is filled with “the smell of smoldering human flesh” when they enter it with a “trail of blood”.

The countries, from Fiji to Mexico, that spoke condemned Russia.