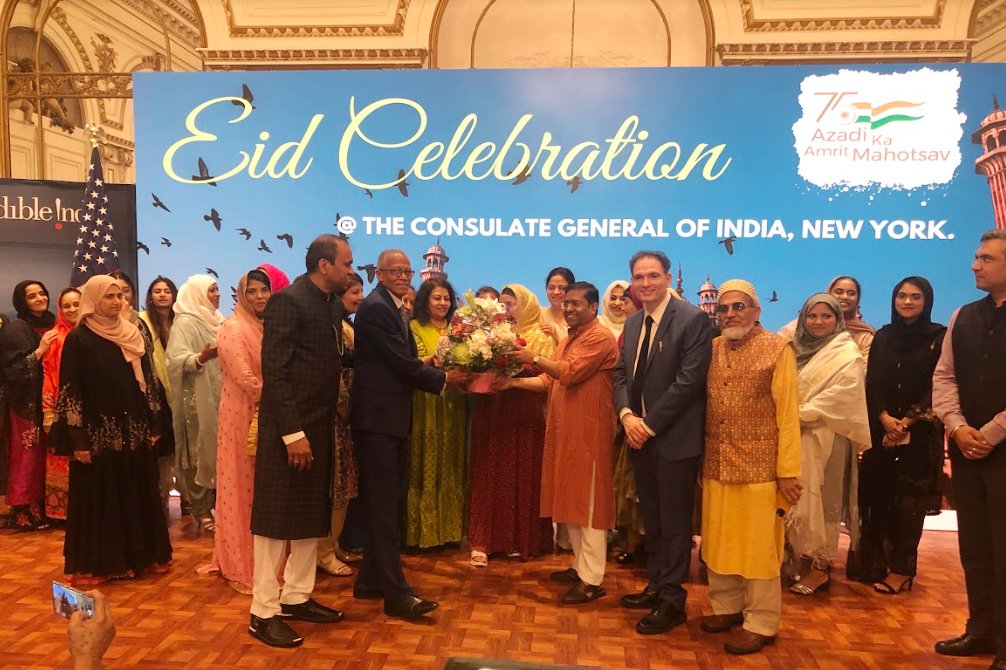 NEW YORK, NY – The Indian Consulate in New York put smiles on the faces of the Indian Muslim community across the tri-state when it celebrated Ramzan Eid on May 22. Counsl General of India, Randhir Jaiswal  told the community to applause, “Though it was delayed by almost three weeks, next time will be done close to the Eid Day.”

Organized by the leaders of the Indian Muslim community around the tri-state area, the event started with the beautiful recitation of Holy Quran by Sumayya Fatima Ahmed and Saniya Ansari explaining to the full hall the meaning of Ramzan.

A press release said, former Vice President District Council 37, Ahmed Shakir, opened the event by reminding the audience that the Indian Muslim community of NY/NJ/CT had come together to celebrate Eid & the 75th anniversary of Azadi Ka Amrit Mahotsav, “of our great country India.” Minhaj Khan, a part of the organizing committee, echoed the sentiments saying, India is a great nation of multiple countries in one country, which makes it “sare Jahan se accha Hindustaan Hamara.”

Present at the event was State Senator Robert Jackson of the 31st district on the West Side of Manhattan. Also at the celebration, Dilip Chauhan, the Deputy Commissioner of the New York City Mayor’s Office of International Affairs was recognized.

After a few more speeches, including expressions of thanks by organizing member Ilayas Quraishi and Tamkeen Khateeb, founder of the cultural organization Mohiban-e-Urdu,  attendees pf all faiths enjoyed music and food together.

The event’s organizing committee thanked and requested the Consulate office for more participation in future events symbolizing the plural and secular values of the two great nations – India and the United States.