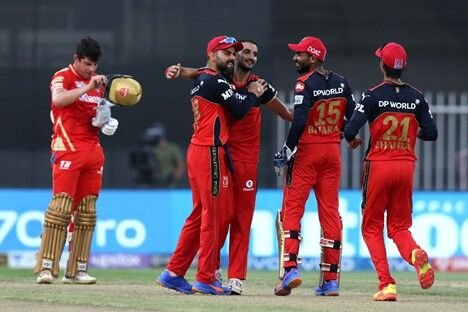 Chennai Super Kings and Delhi Capitals have already made it to the last four with 18 points each. Bangalore joined the top two and has 16 points. All three teams still have two league games to play.

The defeat pushed Punjab into a very tight corner with 10 points after 13 games. It needs to win its last league game against a strong opponent, Chennai, on Oct. 7 but also requires results of other games to go its way.

Kolkata Knight Riders, one of the four teams still chasing a spot in the playoffs, recorded a six-wicket victory over Sunrisers Hyderabad with Kolkata opener Shubman Gill scoring 57 off 51 balls.

Punjab batters continued to let down captain K.L. Rahul and Mayank Agarwal’s confident starts in the tournament with the team restricted to 158-6 in its unsuccessful chase.

Glenn Maxwell (57) had earlier smashed four sixes and three boundaries and pushed Bangalore’s total to 164-7 despite Moises Henriques bowling a miserly spell of 3-12 and Mohammed Shami (3-39) getting all his wickets in the last over.

“Eight wins out of 12 games is a great campaign, (and) we have two more opportunities to finish in the top two,” said Bangalore skipper Virat Kohli, who won the toss and opted to bat on a slow wicket.

“KL (Rahul) and Mayank (Agarwal) batted really well, but we knew we were just two wickets from coming back into the game.”

Agarwal (57) and tournament top-scorer Rahul (39) took Punjab to 91 in the 11th over before Rahul, the Punjab captain, was caught at short third man.

Agawal and Nicholas Pooran both were caught while attempting sweep shots against Chahal while Sarfaraz Khan was baffled on the very first ball with a sharp turner from Chahal that hit the top of off stump.

Devdutt Padikkal (40) and Kohli (25) laid a watchful foundation of 68 runs in almost 10 overs for Bangalore with Padikkal surviving a contentious caught behind decision.

A.B. de Villiers (23) and Maxwell then accelerated in the latter half of the innings with a 73-run fourth-wicket stand before de Villiers was run out in the penultimate over.

“If I have to be honest, our batting has let us down,” Rahul said. “In T20, the top two or three do score the bulk of the runs … but we have missed someone in the middle who scores those 30-40 quick runs.”

At Dubai, last-placed Hyderabad’s below-par season continued when it could score only 115-8 after captain Kane Williamson won the toss and opted to bat.

Gill anchored Kolkata’s chase by hitting 10 fours before he was out at long on in the 17th over. Nitish Rana (25) and Dinesh Karthik (18 not out) also made decent contributions to guide Kolkata to 119-4 in 19.4 overs as Hyderabad narrowly lost its 10th game this season