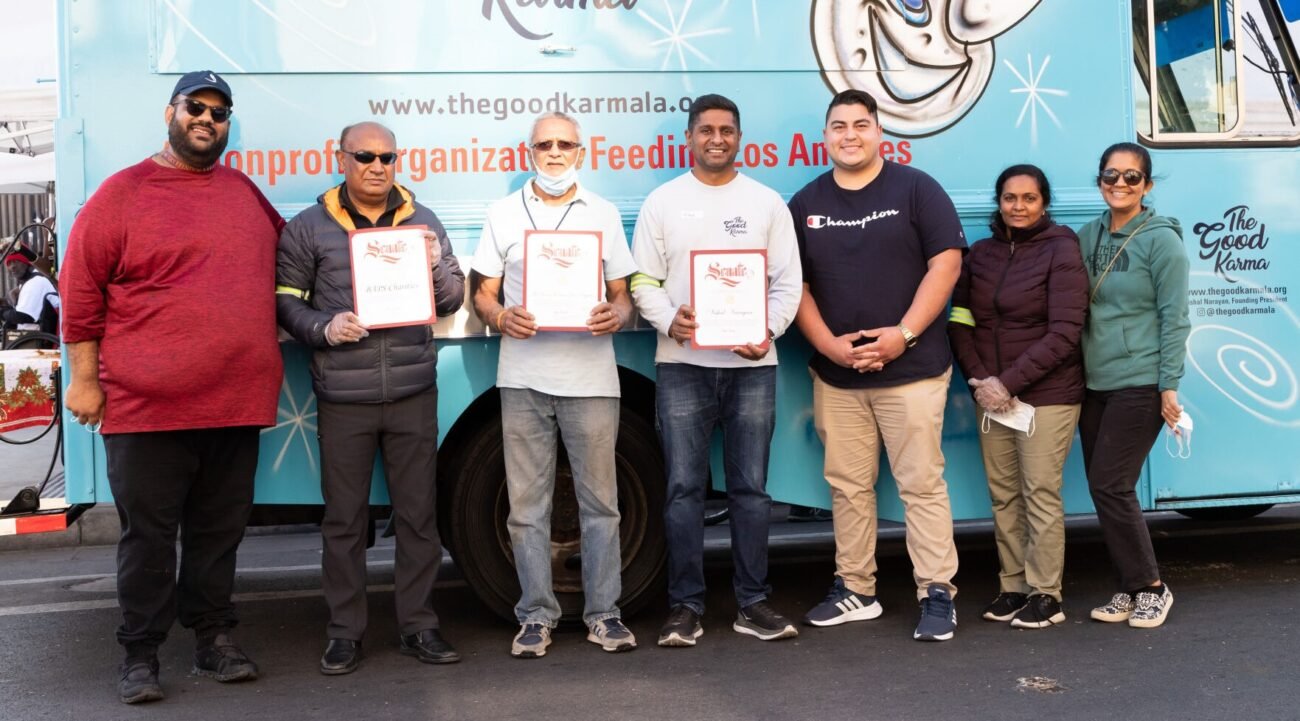 BAPS Charities volunteers, many of them Indian Americans, on Dec. 12 teamed up with The Good Karma Los Angeles to distribute 500 hot meals and other essentials on Skid Row. (photo provided)

Engaging in community service has been a fundamental part of the history of BAPS Shri Swaminarayan Mandir – Los Angeles (Chino Hills). This year, to celebrate the launch of the 10th Anniversary of the mandir and to honor the 100th birth celebrations of Pramukh Swami Maharaj, the BAPS Shri Swaminarayan Mandir, Los Angeles and BAPS Charities continued its mission of giving back to the community by partnering with The Good Karma Los Angeles, a non-profit organization that provides hot meals, water, and essential items to the unhoused of Los Angeles.

Vishal Narayan, Indian American co-founder of The Good Karma Los Angeles, shared his gratitude: “It is such a humbling moment to have BAPS Charities partner with us. It is important to make a direct impact on the community. We started during the pandemic when all the homeless shelters shut down in Los Angeles County, we noticed that there were a lot more unhoused people in Los Angeles that were starving. There is definitely a need to be out here and we are going to continue to do just that,” he said, according to a press release.

BAPS Charities volunteer Deven Patel remarked: “The importance of efforts like we did today was that often times there are efforts being taken to feed the unhoused individuals in areas such as this in Skid Row, but organizations such as The Good Karma are always looking for help, so it was really nice that BAPS Charities was able to come out and join forces with them. By having a large group, we were able to cover more ground in this radius, therefore a majority of the people were able to get food, water, cliff bars, bananas, whatever it was that they needed.”