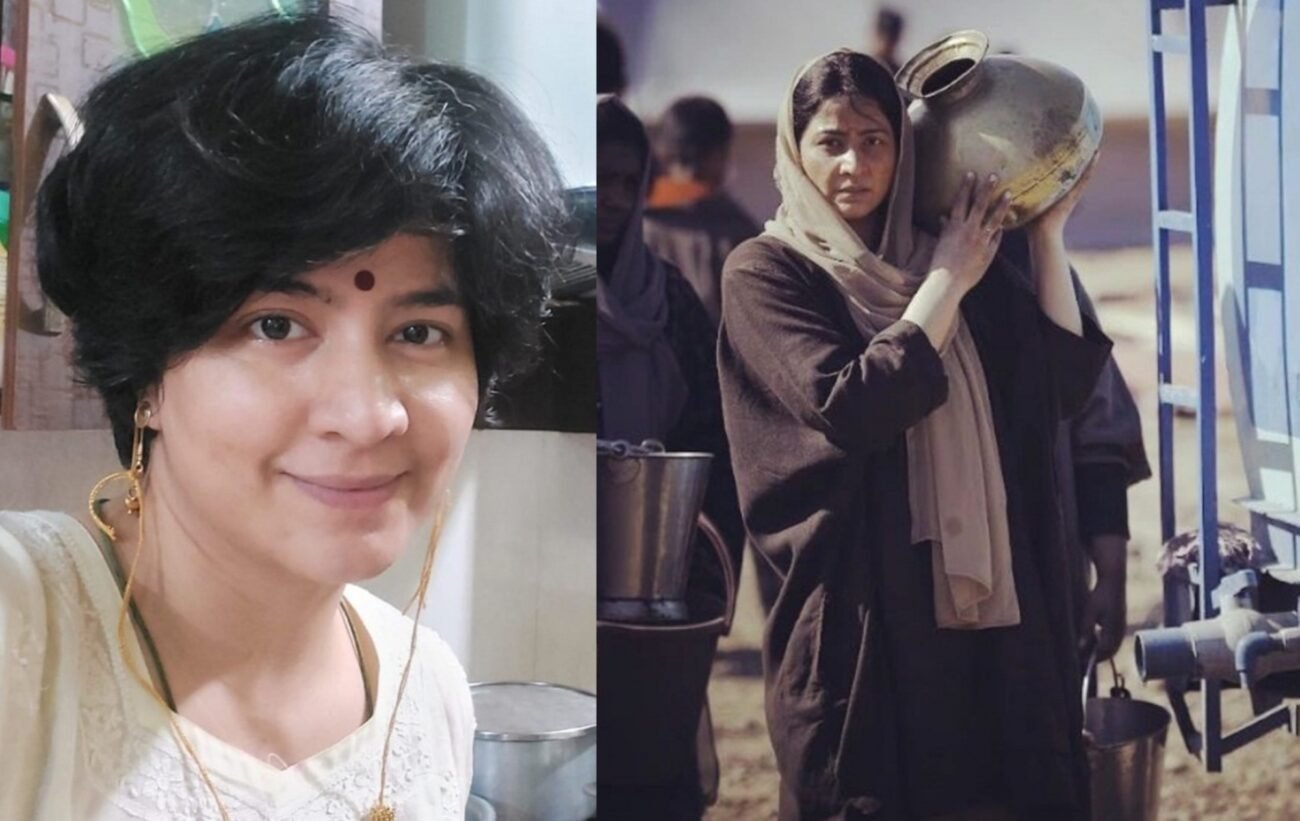 MUMBAI (IANS) – Standing tall with the veteran star cast of ‘The Kashmir Files‘ is a face that not many people knew before.

The person behind the character of ‘Sharda Pandit‘ may not be a big name, but Bhasha Sumbli has emerged as the face of Kashimiri Pandits’ genocide after the portrayal of the character.

Much as the poster of ‘Sharda Pandit’ stirs one with her haunting expressions, Bhasha’s role in the movie tears everyone’s consciousness. In the movie, Sharda is Pushkar Nath’s (Anupam Kher) daughter-in-law. She has very few dialogs in the movie, but her emotive scenes make everyone speechless and are very vital to the movie’s plot.

She portrays the wife of telecom engineer B.K. Ganjoo, who was killed while he was hiding in a drum, and then Sharda is forced to eat the blood-soaked rice, a true happening that took place in the Chhota Bazaar locality of Srinagar in March 1990.

In the last scene of the movie, she portrays Girija Tickoo, who was gang-raped and cut alive with a carpenter’s saw.

Bhasha, a displaced Kashmiri Pandit who was last seen in ‘Chhapak’, grew up at a migrant camp in Delhi amid trauma and misery, where she saw people fighting each other for bread and blanket.

She spoke about the movie, her role and the trauma of displacement.

Excerpts from the interview:

Q: How did you prepare for the role?

A: I did not act. It was an inner expression of the grief with which I grew up. I did nothing much to bring Sharda out. I read and reread and it was there inside me. We know the victims, we know their pain, so I didn’t have to do any acting, it just came out naturally.

Q: How did you get the role?

A: I responded to Vivek Agnihotri’s social media calling wherein he invited people to contribute for this movie and I was in.

Q: Though you don’t have many dialogues in the movie, the audience is appreciating your role as near perfect…

A: I was not aiming at perfection. Had I been conscious of this, I wouldn’t have been able to come out with my performance. Sharda is inside every member of our community. I just alienated my character.

Q: Did playing Sharda disturb you?

A: Yes, it was traumatic. I was disturbed. The incidents shown in the movie are true incidents. We know them. We have grown hearing about these. We have borne all this. And when I was playing the character of B.K. Ganjoo’s wife or doing the Nadimarg massacre scene… I was not acting, I was living them… Both have affected me deeply. It is a truthful depiction — ‘Satvic Abhinav’ — that was it.

Q: Have you also lived in tents and camps?

A: Yes, initially my family did. When my parents were forced to leave Kashmir like the rest of the community, I was a child. We lived in a camp in Delhi.

The life there was full of misery. There was a constant fight for bread and blankets. I remember once my elderly grandfather had to almost wrestle with a young man for a blanket. It was so bad… That grief has remained with us.

Q: ‘The Kashmir Files’ has brought the spotlight back on the community. How do you see this?

A: I am grateful that I was part of this movie. My character and this movie is a tribute to all the martyrs, women and children from our community who suffered.

I could vent out my feelings through this movie, the emotions that were subjugated just came to the fore. I can’t go out and fight them physically but I could, through this movie, affect their conscience, jolt all those who have been sleeping for 32 years.

Q: Have you been to Kashmir?

A: I was born there but I have never been to Kashmir. I did not go to Kashmir to shoot this movie. I had a choice but I refused. Kashmir’s beauty is haunting. If you are deprived of something then it becomes all the more difficult when you are reminded of the fact that it was your motherland, the land of your ancestors.

Q: After the success of the movie, are you getting any offers from Bollywood?

A: Yes, I am getting calls. Even those people are calling me who share different ideologies and divergent views with the movie. The response is encouraging.

Q: The response that the movie has got nationwide, will that help the Kashmiri Pandits get justice?

A: The movie has jolted people. Truth was suppressed for a long time. Hope this is a step towards getting justice.