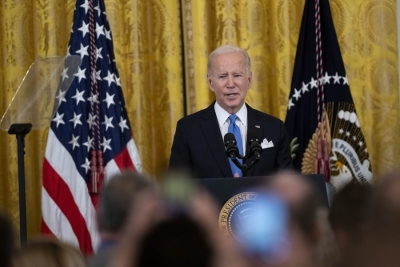 WASHINGTON, DC (IANS) – President Joe Biden‘s remarks calling Pakistan “one of the most dangerous nations in the world” because of its nuclear weapons, demonstrated that the US remains concerned about the safety of Pakistan’s warheads and whether they could fall into the hands of terrorist groups that Islamabad has long hosted, nourished, and deployed.

Biden himself had expressed these fears before, Karine Jean-Pierre, the White House Press Secretary said on October 14, without making any effort to walk back the remarks.

Speaking about China’s President Xi Jinping at a Democratic party fundraiser on October 13, the President said: “This is a guy who understands what he wants but has an enormous, enormous array of problems. How do we handle that? How do we handle that relative to what’s going on in Russia? And what I think is maybe one of the most dangerous nations in the world: Pakistan.”

“Nuclear weapons without any cohesion,” he had added.

A day after, the White House Press Secretary said in response to a question from a reporter: “He’s made those comments before, so that is nothing new, that what you heard from him last night.” But she did try to soften the blow, adding: “But you, again, he believes in a secure and prosperous Pakistan, and so he believes that’s important to our own interests here in the US.”

Islamabad naturally did not feel reassured, and has summoned the US Ambassador, in a move to convey its displeasure. Foreign Minister Bilawal Bhutto sought to play it down at the same time.

“As far as the question of the safety and security of Pakistan’s nuclear assets are concerned, we meet all – each and every – international standard in accordance with the IAEA,” he said at a news conference in Islamabad, referring to the International Atomic Energy Agency, the global watchdog.

Questions about Pakistan’s nuclear weapons have long troubled American officials and leaders. “We have huge… national-security interests in making sure that Pakistan is stable and that you don’t end up having a nuclear-armed militant state,” President Barack Obama said at a news conference in 2009 after 100 days in office. The US, he went on to say, could “make sure that Pakistan’s nuclear arsenal is secure “primarily, initially, because the Pakistan Army, I think, recognizes the hazards of those weapons falling into the wrong hands.”

The Federation of American Scientists which tracks nuclear weapons around the world, says Pakistan currently has the sixth largest arsenal with 165 nuclear warheads. And Pakistan has been growing its arsenal rapidly.

Within two days of the September 11 terrorist attack in the US, Pakistan’s military had relocated nuclear weapons components to six new secret locations, according to a press report and shortly thereafter, Gen. Pervez Musharraf fired his intelligence chief and other officers and detained several suspected retired nuclear weapons scientists, to root out extremist elements that posed a potential threat to Pakistan’s nuclear arsenal.

Seymour Hersh, an American journalist reported in 2009 about secret negotiations between Obama’s officials and Pakistani military officials to reach a “sensitive understanding”. According to his report published in The New Yorker, “These (understandings) would allow specially trained American units to provide added security for the Pakistani arsenal in case of a crisis. At the same time, the Pakistani military would be given money to equip and train Pakistani soldiers and to improve their housing and facilities”, which were goals long-desired by the Pakistani’s then Army chief General Ashfaq Parvez Kayani.”

Though the arrangement was never made public, Hersh noted that the same year US congress approved a $400 million request for what the administration called the Pakistan Counterinsurgency Capability Fund, providing immediate assistance to the Pakistan Army for equipment, training, and ‘renovation and construction’.

Biden’s remarks reveal fears about Pakistan’s nuclear arsenal remain, and that the President expressed them despite – and amidst – recent improvements in bilateral ties that had been plunged into new lows by former Prime Minister Imran Khan’s baseless allegations that Biden had engineered his ouster.

There have been some signs of an improvement including a proposed $450 million US package for the maintenance of Pakistan’s F-16s, brief meeting between Biden and Prime Minister Shahbaz Sharif and visits by American officials and political leaders.