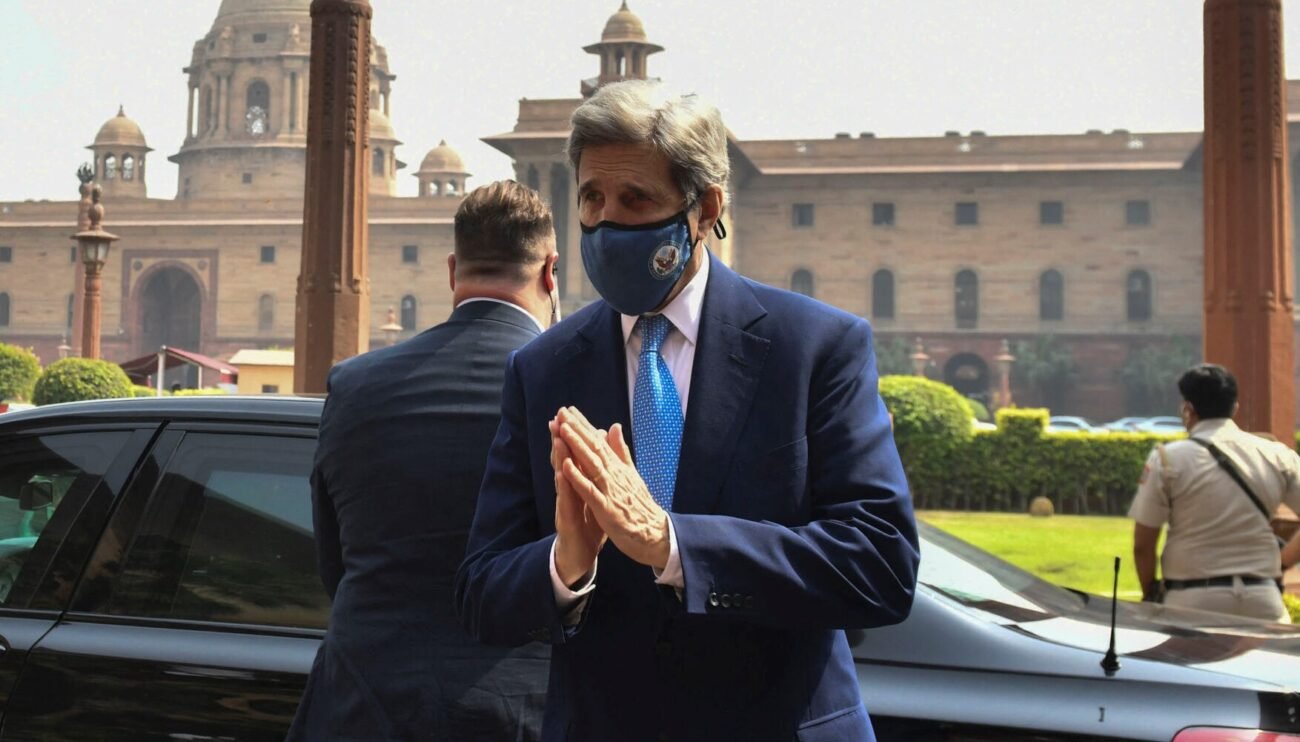 U.S. climate envoy John Kerry gestures as he arrives at the Ministry of Finance for a meeting with Indian Finance Minister Nirmala Sitharaman, in New Delhi on April 6, 2021. (AFP via Getty Images)

NEW YORK – President Joe Biden’s Special Envoy for Climate, John Kerry, is slated to visit India next week to launch an initiative for mobilizing funds for battling climate change ahead of the UN climate change conference in October, according to the State Department.

This will be his second visit to India as Biden’s point-person on climate change, a priority area for the President.

Announcing the visit on Sept. 10, the State Department said: “The Special Envoy’s travel will bolster the US’ bilateral and multilateral climate efforts ahead of the 26th Conference of the Parties (COP26) to the UN Framework Convention on Climate Change (UNFCCC), which will be held October 31 to November 12 in Glasgow.”

The Climate Action and Finance Mobilization Dialogue (CAFMD), which will be inaugurated during the trip, is one of the two main tracks of the U.S-I.ndia Agenda 2030 Partnership that Biden and Prime Minister Narendra Modi announced at the Leaders Summit on Climate in April, the Department said.

Kerry is coming to India after failing to get any deals on climate change from China.

He met China’s climate envoy Xie Zhenhua in Tianjin, away from the capital Beijing, but Foreign Minister Wang Yi spoke to him only by a video link.

Wang told him that cooperation on climate change cannot happen unless bilateral relations improved overall, according to China’s Foreign Ministry.

The U.S. should “cease containing and suppressing China all over the world,” Wang reportedly told him as a pre-condition to cooperation on climate change.

While in Delhi, Kerry will meet Indian government officials and private sector leaders “to discuss efforts to raise global climate ambition and speed India’s clean energy transition,” according to the State Department.

Last month, India’s Environment Minister Bhupender Yadav spoke to Kerry on the phone and tweeted afterwards that they “discussed at length how the largest and oldest democracies can set examples for other countries on Climate Action. India stands committed to working with the U.S. on Clean Energy.”

On another front of the war on climate change, India’s Petroleum and Natural Gas Minister Hardeep Singh Puri worked with U.S. Energy Secretary Jennifer Granholm on developing clean energy, the other track of the India-U.S. partnership.

On Sept. 9, Puri and Granholm co-chaired the first ministerial meeting of the revamped India-U.S. Strategic Clean Energy Partnership “to advance the climate and clean energy goals of both countries.”

India’s Petroleum and Natural Gas Ministry said: “The two sides announced addition of a fifth Pillar on Emerging Fuels, which signals joint resolve to promote cleaner energy fuels. A new India-US Task Force on Biofuels was also announced to build on the scope of work on cooperation in biofuels sector.

“The meeting also reviewed the progress on the India-US civil nuclear energy cooperation.”

Ahead of the meeting, Puri spoke to her on Sept. 8 and tweeted: “We agreed to work closely through the revamped India-US SCEP, as part of the India-US Climate & Clean Energy Agenda 2030 Partnership, scheduled for tomorrow.”

Kerry visited India in April before the Climate Leaders Summit that Biden convened virtually to increase commitments to cutting greenhouse gas emissions and enhancing the use of clean energy.

The U.S. is pressuring India to set a net-zero emissions target that would require it to bring down its greenhouse gas emissions and to neutralize them with carbon and greenhouse gases being absorbed through more forests that absorb them or use new technologies to capture them.

The U.S. paints India as the world’s third-biggest emitter of carbon dioxide, accounting for 7.17 percent of the world output.

It ranks below the U.S., which puts out 27.92 percent of the global emissions, and China, which emits 14.5 percent.

But this hides the fact that an Indian’s greenhouse gas emission is only 1.91 tons per year, compared to 15.52 by an American even as Biden and Kerry press other countries to cut their emission.