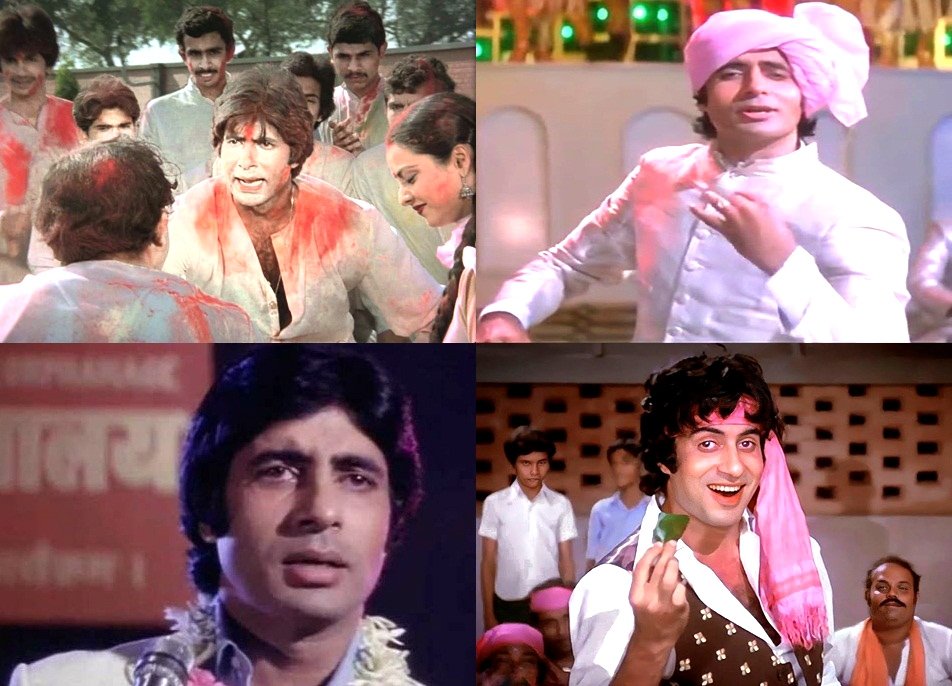 Unlike Hollywood, where musicals are a separate genre, no Hindi film is complete without a full suite of songs — and they are what keeps a film alive in the minds of the people long after it has met its fate at the box office. Amitabh Bachchan fans may not recall the plots of his old landmark films, but the songs still strike a chord.

On Big B’s 80th birthday, let us revisit some of his musical hits from his first decade of mega-stardom, where the songs were not just romantic interludes with his lady love of the moment, but also served various other purposes.

“Dekha na hai re socha na hai re” – “Bombay to Goa” was the first in which Bachchan had a starring role, and though it was moderately successful, it did bring him to the attention of several key stakeholders in the industry — notably upcoming script-writers Salim-Javed and veteran actor Pran — who would advance his career. See him cavort and prance around in a bus full of a cross-section of Indians and you’ll realise he had a career ahead of him. Kishore Kumar was at his exuberant best, R.D. Burman provided a peppy beat and Rajinder Krishan the lyrics.

“Main pal do pal ka shaayar hoon”: By 1975, Bachchan had cemented his image as the “angry young man” while proving he could do softer roles too. It was Yash Chopra’s “Kabhi Kabhie” that showed him in a successful romantic avatar. And in the role of a poet, he sparkled in this exposition of poetry with the lyrics by the legendary Sahir Ludhianvi, set to music by the under-appreciated Khayyam, and rendered in Mukesh’s soulful voice.There is also another version — “Main har ek pal ka shaayar hoon” — where Sahir perfectly mixes Hindi and Urdu in a mesmerizing love lyric.

“My name is Anthony Gonsalves”: Keeping himself prominent in the Manmohan Desai potboiler “Amar Akbar Anthony” was not easy, given that he was one of the three leading actors and among a host of screen-stealing supporting actors. But this song was Amitabh’s own, right from when the Easter Egg peeled open to reveal him, dressed up as a toff, complete with monocle, and speaking high-flown but irrelevant English to impress Parveen Babi. Kishore Kumar was again the suitable voice. Laxmikant-Pyarelal provided the music and steadfast Anand Bakshi the lyrics.

“O saathi re tere bina bhi kya jeena”: One is spoilt for choice for the best Bachchan song from “Muqaddar Ka Sikandar”– the motorcycle-ride philosophical exposition of “Roote huye aate hai sab” and then the point where he takes over “Salaam-e-Ishq” with a long alaap, which Kishore Kumar was extremely reluctant to do and had to be forced into it by the music directors Kalyanji-Anandji. It is this plaintive song, with haunting music, that shows Bachchan at his most vulnerable. The lyrics were by Anjaan.

“Khaike paan Banaras wala”: This song from the slick crime thriller “Don” was not part of the film originally. It was introduced later at the suggestion of director Chandra Barot’s mentor Manoj Kumar to release the tension of the tight second half. Showing Bachchan reconnecting with his eastern UP heritage and dancing with abandon but precision, it helped make the film a hit. Kishore Kumar, Kalyanji-Anandji, and Anjaan provided the voice, tune, and lyrics, respectively.

“Dilbar mere kab tak mujhe.”: “Satte Pe Satta”, the Indian version of “Seven Brides for Seven Brothers”, is best known for that lovelorn lyric “Pyaar hame kis mod pe le aaya”. Bachchan, the eldest brother, however, rises above his initial unrefined bucolic image, in his own love quest to woo Hema Malini with this impassioned appeal — and the outcome never seems in doubt. Kishore Kumar was the powerful voice, R.D.Burman crafted his immortal strains, and Anand Bakshi the words.

“Tere jaisa yaar kahaan.”: “Yaarana”, the only film to have Bachchan and Amjad Khan as friends, instead of the uncompromising and fierce antagonists they were in their usual outings together, is a touching story, apart from the usual formula elements. It also stands out for its music — but more than the soothing song mentioned in the title, it is a paean to a unique male friendship, which even pips

“Yeh dosti, hum nahi todenge” of “Sholay”. The music was by Rajesh Roshan, the lyrics by the dependable Anjaan, and Kishore was Amitabh’s voice as usual.

“Mere angane men tumhara kya kaam hai”: This song, performed and sung by Bachchan, in several drag guises, is one of his best-known, and needs no more introduction. Kalyanji-Anandji provided the music and Anand Bakshi the lyrics.

“Rang barse bheege chunar wali”: Taking over the traditional Holi song of India, this one from “Silsila” scores over other songs as it is a father-son combination, with Harivansh Rai Bachchan’s lyrics rendered by an over-the-top Bachchan to music scored by the redoubtable Shiv-Hari (santoor and flute maestros Shiv Kumar Sharma and Hari Prasad Chaurasia). Its exuberance and rustic overtones elevate it over the sombre “Neela aasman so gaya”, also rendered by Bachchan, with lyrics by Javed Akhtar.

“Pag ghungru baandh Meera nachi thi”: This madcap number from “Namak Halaal”, rendered by Kishore Kumar — with assistance from Bachchan at points, scored by Bappi Lahiri, and written by Anjaan and filmmaker Prakash Mehra — is an ensemble song that brings together Bachchan flaunting his country bumpkin image and meeting rock and roll, a love serenade, and an expertly done takedown of (villain) Ranjit.

“De de pyaar de”: On one hand, this uber-loud serenade from “Sharaabi” may seem a perfect example of Bollywood excesses, but on the other, it has its pluses in the way a brass band is incorporated by rich playboy Bachchan to trace out his lady love from a block of urban apartments, by waking up everybody. Kishore Kumar sings with his usual gusto, Bappi Lahiri provides the loud music, and Anjaan the lyrics.