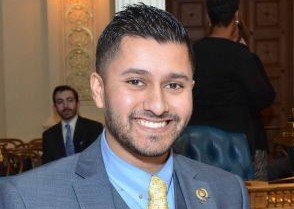 New Jersey Indian American state Assemblyman Raj Mukherji is one of the sponsors of the bill. (assemblydems.com photo)

In an effort to combat the surge in hate crimes against the Asian American and Pacific Islander community in the wake of the COVID-19 pandemic, New Jersey state Assembly Democrats Raj Mukherji, an Indian American; Mila Jasey, Britnee Timberlake and Sterley Stanley sponsored a bill to require the curriculum of students in grades K-12 to include lessons on the history and contributions of the AAPI community.

The bill, which uses education to combat this hatred, passed the full Assembly Dec. 20 by a vote of 74-2.

New Jersey’s AAPI population is growing faster than any other ethnic or racial group, according to a press release. The number of reported anti-Asian hate crimes has gone up by nearly 75% over the past year, according to the New Jersey State Police.

In addition to requiring school districts to find an appropriate place for this instruction in the curriculum of K-12 students, the bill would also require boards of education to select inclusive instructional materials and, should the Department of Education create a Commission on Asian Heritage, seek the assistance of the commission to teach students about the history and cultural diversity of the AAPI community.

“Members of the Asian American and Pacific Islander community have made countless contributions to our state and country, yet they are made virtually invisible by our history books. This erasure of AAPI history is unacceptable and incredibly harmful for young people who are being robbed of valuable representation that could have a positive impact on their lives.

“Excluding the rich history of the AAPI community from our schools’ curriculum not only prevents students from gaining a full understanding of our nation’s history, but also opens the door for racial biases that can turn into violence and hatred.

“One of New Jersey’s best qualities is its diversity, which we should be highlighting in our schools. By expanding the K-12 curriculum to include lessons on the history and contributions of the AAPI community, we can help break down persisting negative stereotypes and show the over 140,000 Asian American and Pacific Islander students in our state that their stories and experiences matter.”