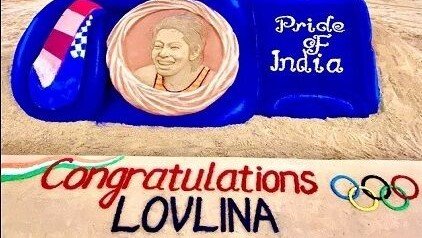 BHUBANESWAR – Noted sand artist Sudarsan Pattnaik has created a 10-foot long sand glove to congratulate boxer Lovlina Borgohain for winning the bronze medal at the Tokyo Olympics, on the Puri beach in Odisha.

India’s Lovlina Borgohain settled for a hard-fought bronze after losing the women’s welterweight semifinal (69 kg) against world’s number one Business Surmeneli in Tokyo, thus becoming the third athlete after Mirabai Chanu and PV Sindhu to bag a medal for India at the ongoing Games.

Chanu had opened up India’s medal account at the Olympics with a silver medal in the women’s 49-kilogram weightlifting category. Chanu lifted a total of 202 kgs to win the silver.

Pattnaik created the 10-foot boxing gloves for Lovlina with the message, “Pride of India.”

“We congratulate Lovlina for winning the bronze medal in the Olympics,” he said.