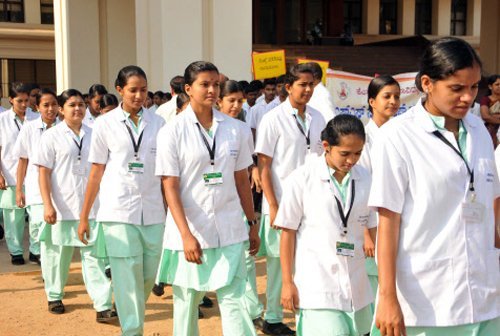 TORONTO (IANS) – To address acute labor shortages in its healthcare sector, Newfoundland and Labrador will set up a recruitment office in Bengaluru to bring internationally trained and registered nurses to the Canadian province.

“There’s still, you know, an incredible need for nurses here, and if you look at the demographics it’s only going to get worse,” Newfoundland and Labrador Premier Andrew Furey said addressing a news conference last week.

“Our government and dedicated partners are taking bold action to address the staffing issues facing the healthcare system in our province, as we compete with other jurisdictions to attract and retain health care professionals at this critical time,” Furey said.

The recruiting team will meet graduate nurses who have the academic credentials to qualify for licenses in Canada.

According to local media reports, nurses are struggling with burnout due to overtime, and more than 600 jobs lie vacant.

Furey said they chose Karnataka as it has more than 100 nursing schools with training like Newfoundland and Labrador’s.

Immigration Minister Gerry Byrne told reporters that the recruitment effort will be modeled after the province’s satellite office in Poland, which was set up to attract Ukrainians fleeing Russian attacks.

According to Statistics Canada, the province experienced the least growth via immigration.

Meanwhile, in India, government data shows a sharp rise in the demand for Indian nurses post-Covid from several countries like Ireland, Malta, Germany, the Netherlands, Finland, the UK, and Belgium.

After the Philippines, India ranks second in the number of nurses working abroad for brighter job opportunities, better salaries, and other benefits.