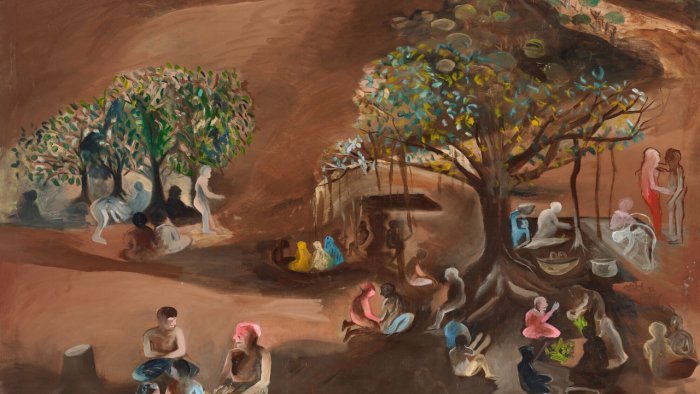 ‘The Banyan Tree’ by Bhupen Khakhar is estimated at $2million is on the auction block. (photo: Christie’s)

WASHINGTON, DC – In a big auction starting Mar.23, Christie’s is set to offer the seminal collection of Indian art belonging to the Indian American couple, Mahinder and Sharad Tak. Titled ‘The Visionary Collection of Mahinder and Sharad Tak,’ it is part of the South Asian Modern + Contemporary Art live auction by Christie’s during Asian Art Week. Previews of the works have happened in London, New York and Mumbai.

For decades, Mahinder and Sharad Tak’s sprawling home in Bethesda, near the capital, has been a magnet for some of the country’s most well-known social, cultural, and political figures. The couple has hosted art exhibitions, musical performances, mushairas or traditional poetry recitals, school tours, and even significant cultural and political fundraisers.

Mahinder was born in Kashmir and grew up in the Himalayan foothills, surrounded not only by lush nature, but also by rich traditions of art, poetry, music, and theatre. She recalls going to the museum on the banks of the Jhelum River in Srinagar with her siblings and grandfather, an Urdu and Persian poetry scholar, to see the collection of miniature paintings. A retired radiation oncologist and US army colonel, she chose medicine as a career, but her interest in and appreciation for the arts remained a constant in her life.

Mahinder would visit art galleries on her annual trips back to India, always buying one or two pieces for her home. However, it wasn’t until a few years later, in the early 1980s, when she met artist Maqbool Fida Husain on one of his trips to the US, that her interest grew into a passion and she began to collect Indian art seriously. Husain introduced Mahinder to several Indian artists and gallerists, as well as the only major collectors of South Asian art in America at the time, Chester and Davida Herwitz.

In the decades since, Mahinder was an early supporter of several artists, including Husain, Manjit Bawa, Jagdish Swaminathan, Sayed Haider Raza, Gulam Rasool Santosh, and others. However, it was through the Herwitzes that Mahinder realised how art and her growing collection could become a language of cross-cultural understanding.

Several of the Tak family’s artist, poet, and musician friends would stop by as the walls of the Tak home began to fill with an incredible array of South Asian art. Many would stay with the Tak family, displaying or performing in their home. Husain, Manjit Bawa, Krishen Khanna, Arpita and Paramjit Singh, Arpana Caur, and Natvar Bhavsar, to name a few, held exhibitions and events at the Taks, which helped them significantly grow their collector bases. Arts and Antiques magazine named the couple one of the top 100 collectors in the country in 2006.

Mahinder noted, “… most of all, collecting art has allowed me to keep my Indian identity in my home in America. My goal is to pass this rich heritage to our future generation of Indian Americans in the US.”

Today, Mahinder and Sharad are recognized not only as pioneering art collectors but are counted among the most prominent Indian American philanthropists in the country as well. The couple supports several organizations, particularly those that promote health care, microcredit and the education of girls in India and elsewhere. They also support the American India Foundation and the University at Buffalo, Sharad’s alma mater.

Their patronage is particularly significant in the American art world, and they frequently contribute to museums, exhibitions and projects that support the arts of South Asia and champion women and underrepresented minorities. They have gifted and loaned works from their collection to the Smithsonian National Museum of Asian Art, helped major American institutions acquire new works, and continue to loan works to several groundbreaking museum exhibitions.

Mahinder has served on the board of trustees of the National Museum of Women in the Arts in Washington DC for several years now, and the Taks have also contributed to several major exhibitions and events at the Smithsonian Institutions, the Kennedy Center and the National Museum of Asian Art, where Mahinder also served as a board member in the past.

The couple continues to significantly provide for the visibility of women artists and artists of color in the country by lending support to exhibitions and museum accessions that spotlight them.

Mahinder is also passionate about the involvement of the Indian American community in the political sphere and has mentored and supported several members of the community who have served in the government.

She co-chaired the Democratic National Committee’s Indo-American Council during President Barack Obama’s campaign in 2008, and later, served as a member of the finance committee for Hilary Clinton’s presidential campaign in 2016, extending a relationship which began when Clinton was First Lady in the 1990s.

Over the years, Mahinder has been honored with several awards for her contributions in the fields of politics, art and culture, both in India and the United States. (with inputs from IANS, Christie’s)