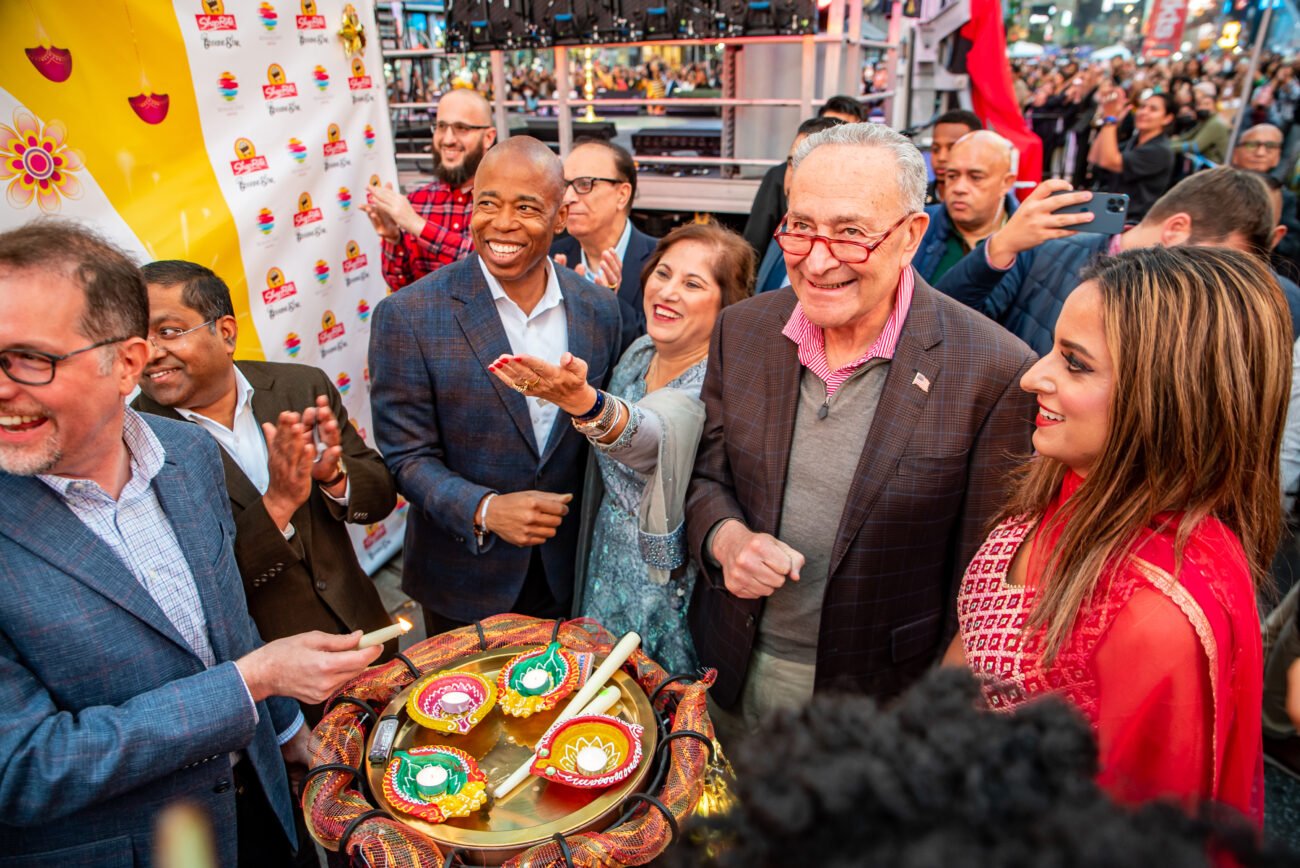 “We acknowledge the Diwali, and we need to acknowledge the power of women and the significant role women play in our country, in our city. Let’s continue to lift our women as we lift up our country – our city,” said Adams while inaugurating the celebrations.

Times Square witnessed huge participation by the Indian American community, Americans and others, many of whom were dressed up in traditional outfits from different states of India, showcasing India’s rich art, culture, and diversity. The Diwali Bazaar provided a variety of traditional Indian cuisine and sweets and merchandise for Diwali festivities.

“We love our community, our Indian community, and we love that we all come together here in New York with our diversity,” said Schumer. He has been celebrating the festival of Diwali with the Indian American community in New York for many years.

Rajkumar while addressing the crowd also spoke of the Mayor saying, “On the street, they call him – Mayor Eric Adams – a Hindu Mayor. A plant-based diet, and meditation, he does it all. I am honored to be the first Hindu elected to be in the NYS office. The first Indian woman but defiantly, not the last one,” she said.

The speeches were peppered with a variety of traditional performances and lively acts by renowned artists like Jay Sean, Arjun, Rimi Nique, and Social Media fame artists Kiran + Nivi and Hrishi kept the audience glued for hours. 100s of students of Arya Dance Academy and Shiamak Davar School of Dance, Heeray, DanceX, presented dazzling dance shows at the event.

Jaiswal said, “Every year, we celebrate Diwali in Times Square but this year, it is somewhat different. It happened to be part of India’s 75th year of Independence.”

Renowned Oncologist Padma Shree Dr. Dattatreyadu Nori was recognized and honored for his lifetime excellent services to health and medicine by Adams.

Attendees were encouraged to take the advantage of Bivalent Vaccines at nearby COVID Clinics with the partnership of the “We Can Do This” campaign of Vaccines.gov, a Health & Human Services initiative.

“We appreciate the support and cooperation from the authorities of the City of New York, NYPD, FDNY, Heath Department, Times Square Alliance, and other Government organizations to create yet another successful event at Times Square,” AR Helping Hands Foundation Diwali at Times Square organizer, Neeta Bhasin and Naresh Kumar said in a statement.