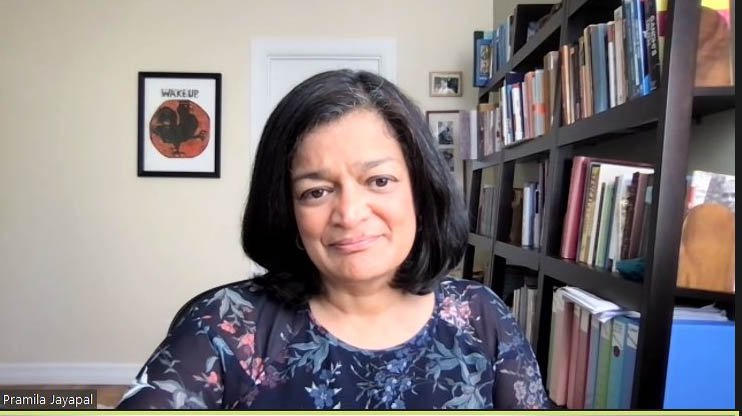 WASHINGTON, DC – Two months ago Indian American Congresswoman Pramila Jayapal was stalked by a man who drove by her home in Seattle, WA hurling insults and invectives in her direction. He told the police after his arrest that he would do that every day till she packs her bags and left for India.

The harassment has continued, with Jayapal tweeting on September 8, about her ordeal of receiving hate messages over the phone. “Typically, political figures don’t show their vulnerability. I chose to do so here because we cannot accept violence as our new norm,” she wrote. “We also cannot accept the racism and sexism that underlies and propels so much of this violence.”

The Democratic Congresswoman also posted parts of call she had received where the threats are filled with violence:

“Get ready for the worst year of your life. It’s going to be turmoil every day.”

The Washington Post on September 7 reported in detail about her 47-minute ordeal on the night of July 9 when she was home and experienced for the first time a stalker’s hatred. She said she was watching a psychological thriller “Mindhunter” with her husband, Steve Williamson, when it started.

That was the first time they saw and heard the stalkers, who came in a black car with gold rims and drove past their house had been a familiar sight to neighbors.

“F….. C…,” said one of the men, according to voices captured by security cameras. Another voice said something that included “India”.

“But I will continue to drive by here and voice my opinion, until she goes back to India – or something else,” Brett Forsell, 49, one of the two men said as he sat in a police car after his arrest.

Jayapal has also been a strident critic of former President Donald Trump and blamed him for the stalker. “The person that occupied the White House, the highest office in the land, actually used and unleashed and mobilized all of that violence and white supremacy using the tools of the federal government,” she said shortly after the incident.

“I’ve had people forever telling me to go back to India,” Jayapal told The Washington Post. “But I will say that this was different. This was really different.”

Forsell had planned to pitch a tent close to Jayapal’s house to serve her as a constant reminder. And on the night of his arrest, he was carrying a Glock pistol, which he claimed to the police, was meant only for self-defense. (with IANS inputs)