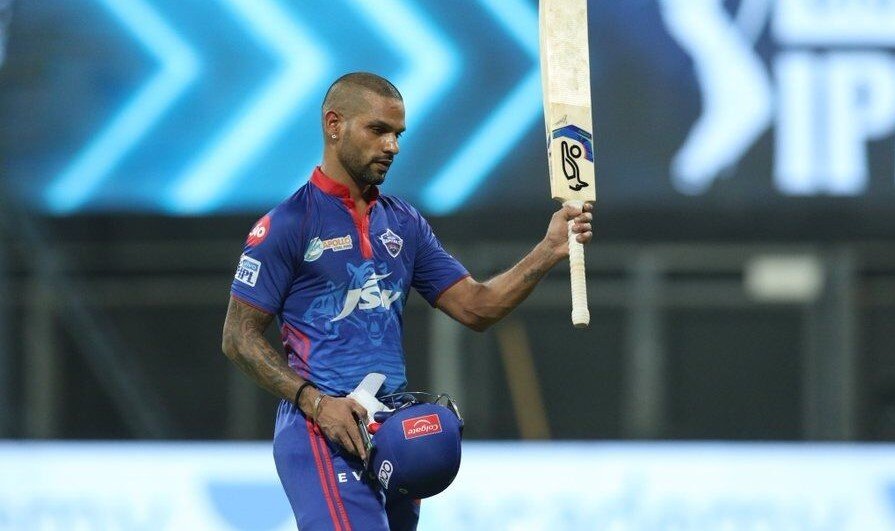 Shikhar Dhawan’s 69 not out came off 47 balls and he hit six fours and two sixes as Delhi raced to 167-3 with more than two overs to spare. (BCCI/IPL/IANS photo)

AHMEDABAD, India — Shikhar Dhawan’s third half century in this year’s Indian Premier League lifted Delhi Capitals to the top of the table as they beat injury-hit Punjab Kings by seven wickets May 2.

Kane Williamson, taking over the captaincy from David Warner, couldn’t change Hyderabad’s fortunes with the team still on just one win out of seven games at the halfway stage of the tournament.

Punjab suffered a setback when regular skipper Lokesh Rahul was ruled out after being diagnosed with acute appendicitis.

He was rushed to hospital in Ahmedabad and the franchise said the issue “will be resolved surgically… for safety measures he has been transferred to the hospital.”

Punjab’s stand-in captain Mayank Agarwal replaced Rahul as an opener and his unbeaten 99 off 58 balls was the cornerstone of his team’s total of 166-6.

Delhi’s premier fast bowler Kagiso Rabada (3-36) removed dangerman Chris Gayle (13) within the batting powerplay and finished off with the wicket of Chris Jordan.

Dawid Malan, playing his first game this season, couldn’t accelerate and scored a run-a-ball 26 before he was bowled by Axar Patel (1-21).

Dhawan’s 69 not out came off 47 balls and he hit six fours and two sixes as Delhi raced to 167-3 with more than two overs to spare.

Dhawan is the tournament’s leading run-scorer and he continued his sublime form after Prithvi Shaw again provided a quickfire start with a 22-ball 39.

Dhawan dominated leg-spinner Ravi Bishnoi, who conceded 42 off his four overs without getting a wicket.

BUTTLER AT HIS BEST

Buttler’s powerful hitting in the latter half of the Rajasthan innings saw the Englishman score an unbeaten 124 off 64 balls as he rocketed his team’s total to 220-3.

“It’s a small ground, the more balls you face you can capitalize in the end,” Buttler said. “We haven’t played our best cricket, hopefully for myself and the team we can kick on in the back half of the tournament.”

Buttler expertly navigated Hyderabad’s move to use ace leg-spinner Rashid Khan (1-24) within the first 11 overs of the innings. Buttler watchfully played out the spinner and raised his half century off 40 balls with four boundaries and two sixes.

Buttler shared an impressive 150-run stand with captain Sanju Samson (48) before the latter was caught on the edge of the boundary at long-off in the 17th over.

Once Khan bowled his quota, Buttler scored freely against Hyderabad’s fast bowlers, scoring his last 74 runs off only 25 balls, hitting seven boundaries and six sixes in the process. Fast bowler Sandeep Sharma eventually clean bowled him in the penultimate over, but not before Buttler smacked the fast bowler for three sixes in the same over.

Rajasthan kept taking wickets at regular intervals once Manish Pandey (31) and Jonny Bairstow (30) saw off the batting powerplay by putting on a 57-run opening-wicket stand.

Williamson (20) was well deceived by Kartik Tyagi and holed out in the deep in the 13th over before Mustafizur returned and claimed the Afghanistan duo of Mohammad Nabi and Khan.

Rajasthan is fifth with three wins from seven games.

“It was a tough day and a very competitive total from Rajasthan,” Williamson said. “We’ve had a number of challenges over the last three weeks, but we keep fronting up and make adjustments.”