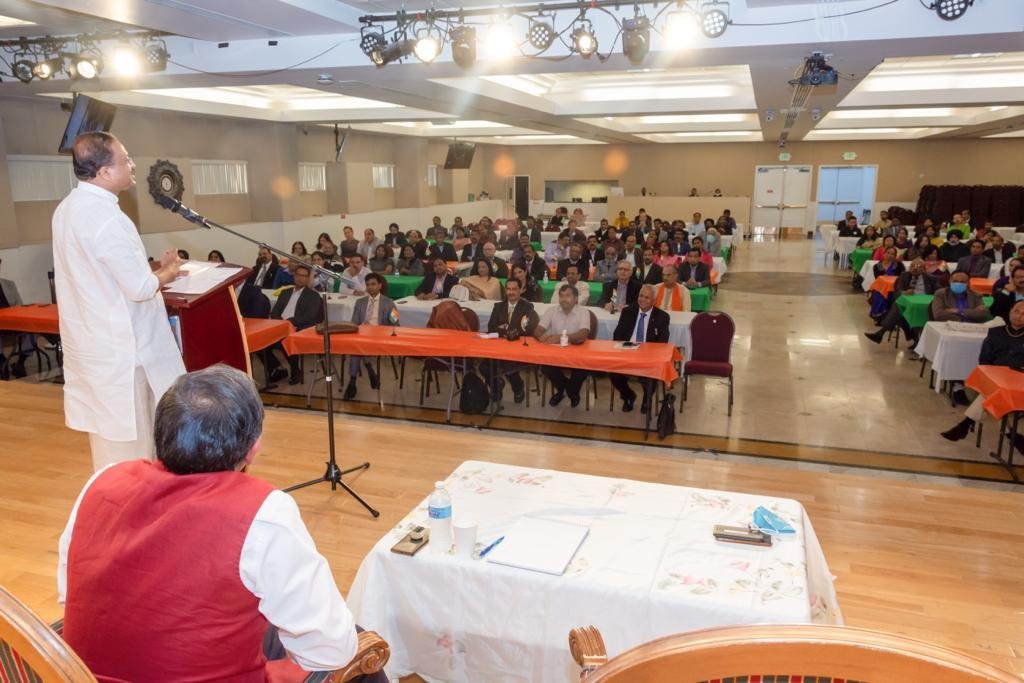 BUENA PARK, CA – The Indian Consulate, San Francisco, on May 21 hosted an event where the SoCal community could meet and interact with the visiting Indian Minister of State for External Affairs, V.Muraleedharan. Those who gathered at the Jain Center of Southern California represented a wide swathe of community organizations.

The minister’s visit came on the heels of his stop in New York to participate in the United Nation’s first International Migration Review Forum and the US convened meeting on global food security.

Consul General T.V.Nagendra Prasad in his brief remarks praised the Indian American community and said it was a testament to the respect they command in the state of California that Governor Gavin Newsom was among the first to ship oxygen concentrators to India during the pandemic. He said he was also happy to note the trend of more and more people getting into public service. On the prickly consular issue of OCI cards, the Consul General was disarming in saying that complaints were inevitable and simply shared an impressive statistic to point toward progress: Last year alone, 54,000 OCI cards had been cleared and issued; this in comparison with the 27,000 in the years past.

In a pre-thought-out program flow, Deputy Consul General Rajesh Naik began by taking a set of questions from the audience and after introducing the minister, requested him to weave his answers into his speech.

Before he dove into answering them, Muraleedharan began by acknowledging that the Indian American community was a well-educated, well-heeled one “representing the best of India.” In response to a question and referring back to the Consul General’s stats on OCI, he said the huge interest in OCI, not just in the US but in other parts of the world, was a clear indication of the “strength of the Indian tricolor,” whereas in the past there had been no interest in Indian citizenship.

He recalled how he had met an immigrant family from Tamil Nadu who wanted to be eligible even though the family had left India’s shores six generations ago – as it stands, OCI is given only to those who emigrated four generations ago.

The minister said now that India’s Prime Minister Narendra Modi considers the diaspora, “a living bridge connecting India to the rest of the world,” it was only naturally their interests would be addressed. His ministry which used to focus only on bilateral relations is now more focused on helping the community.

Given this shift, Muraleedharan assured, while it is essential to prove that there is indeed a real India link, the powers that be look at the law in the spirit in which it was framed and not literally. He said India had, over the decades, functioned under outdated British laws but it was now working to rectify this. “The burden of compliance is being done away with,” he said. After becoming a citizen too there is the burden of compliance, the minister pointed out, and even that is being simplified as seen in tax reform.

Addressing another question, this time pertaining to Ukraine, the minister said “we are neither friendly toward somebody nor away from somebody. At the core of our hearts, we have our interests but at the same time we have global good in our mind.” The banning of wheat exports had led to the perception that India is against global food security but “India is doing what it is supposed to do for India and Indians.” He averred, “ this is the reality of every country’s foreign policy.” India might have toed the line of others in the past but that was not the case anymore. He said a tweet he had seen summed it up well, where was slated as not arrogant, but confident.

India, he said, was determined that the same inequity that happened with vaccines would not happen with wheat. “We are not hoarding,” he said, pointing to shipments to Sri Lanka, Afghanistan, and others.

Harking back to his earlier comment on how the diaspora was being viewed differently, Muraleedharan said India no longer considered it a ‘brain drain’ but has confidence in the youth that whichever part of the world they go to they will make India proud.

Referring to another comment that India should earmark monies for lobbying, he felt that was not the solution to empower India. The aim was to see that in India’s 100th year of independence, the nation emerges as a global leader, so the next 25 years were crucial, the minister said. Every Indian citizen whether in India or outside has a role to play in making this happen.

It is not limited to economic growth but it is about percolating the right narrative about India. The whole perspective is created not just by mainstream media but through digital platforms and every individual can play a role in this. He picked up Modi’s slogan to make his point” ‘Sabka Saath, Sabka Vikas, Sabka Vishwas’ to now include ‘Sabka Prayas (everyone’s effort).’

He concluded his speech with a push for increasing tourism to India.

After Yogesh Shah President of the Jain Center gave a vote of thanks, the audience mingled and lined up for pictures with the minister.

During his SoCal visit, Muraleedharan also made stops at BAPS, Chino Hills and the University of Southern California, among others.