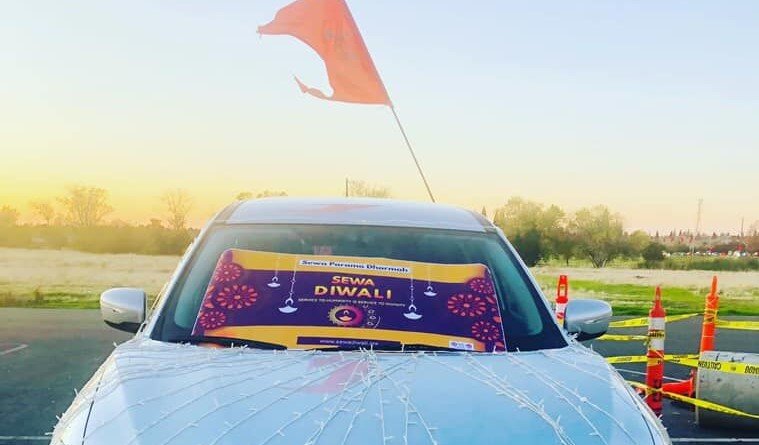 Over 100 local Indian Americans joined Roseville, a suburban city of Sacramento, Calif., Nov. 7 to celebrate Diwali 2021 with a ‘Parade of Lights’. People, dressed in traditional Indian attire, came from across the greater Sacramento area to participate in the parade, according to a press release by Venkat Nagam, media coordinator for Sewa’s Sacramento Chapter.

Local residents spent hours decorating their cars with colorful LEDs for the event, which supported Sewa Diwali, an initiative with the mission of “Sewa Paramo Dharmah” (i.e., Service to Humanity is Service to Divinity), which aims to help the local community by collecting and donating food and winter clothes.

Over 30 local organizations came together to support 12 food banks in 10 cities, including nearby cities like Yuba City and Chico. Last year, the SewaDiwali program supported by 26 organizations donated 2600 pounds of food to eight food banks in seven local cities, said the release. More than 30 cars were decorated with glittering lights made the sky near the Fountain and Galleria Mall area “look like Heaven wearing jewelry.”

Roseville city councilman Scott Alvord, speaking on the occasion, said, “Tonight it was an honor to be invited to drive in the Sewa Diwali festival of lights parade on a nine-mile loop around Roseville. Roseville has a lot of residents with Indian heritage, and the Sewa group has done some incredible service to those in need in our community. The adults get their children involved in helping with community service, and it’s a great example. I have come to know that the Sewa International group gave an incredible amount of food (and more) nationwide. I believe we are here to serve others and they set a great example.”

Sewa Sacramento Chapter coordinator Presh Sinha explained the meaning behind “Sewa,” “Diwali,” “Sewa Diwali” and “Sewa USA,” as well as the purpose of the event.

Earlier on Nov. 6, Sewa held a similar car parade in the neighboring city of Folsom.