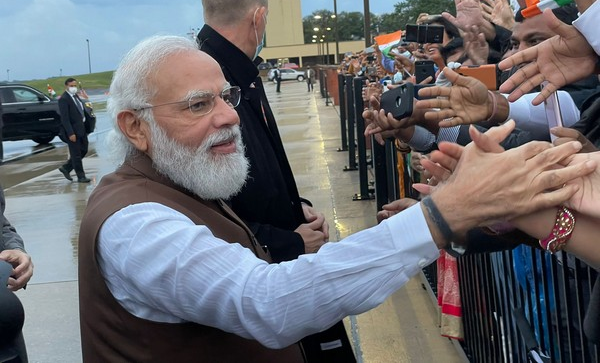 More than a hundred members from the Indian American community gathered at the Joint Base Andrews to welcome the Indian leader Sept. 22, 2021. (Twitter photo/ANI Digital)

WASHINGTON – Prime Minister Narendra Modi, who arrived in Washington for a three-day visit, on Sept. 22 received a warm welcome from the members of the Indian American community at Joint Base Andrews in Washington, DC.

More than a hundred members from the Indian community gathered at the Joint Base Andrews to welcome the Indian leader. Modi was greeted by a crowd of Indian Americans, who were chanting his name and waving the Indian flag amid light showers.

This is Prime Minister Modi’s first visit abroad beyond the neighborhood since the COVID-19 pandemic outbreak.

Upon his arrival in Washington, he was received by U.S. Department of State officials including T.H. Brian McKeon, U.S. Deputy Secretary of State for Management and Resources, at Joint Base Andrews.

He was welcomed by India’s Ambassador to the U.S. Taranjit Singh Sandhu, along with the defense attache including Brigadier Anoop Singhal, Air Commodore Anjan Bhadra and naval attache Commodore Nirbhaya Bapna.

Modi stepped out of his motorcade to interact with the diaspora waiting for his arrival.

The prime minister was seen smiling and shaking handing with the members of the Indian community.

Another member of the Indian community said Modi’s visit will be “very instrumental” in bringing India and U.S. ties much stronger.

“This visit is very instrumental in bringing India and U.S. ties much stronger, given the COVID-19 and Afghan crisis. He is the leader who can solve every situation in the world. We are proud, we are Indians and he is representing millions of Indians,” she said.

During his visit, he will address the UN General Assembly and attend the Quad Leaders Summit as well as hold a bilateral meet with U.S. President Joe Biden at the White House.

Biden will host Modi at the White House on Sept. 24, the first in-person meeting between the two leaders after Biden took over as the president on Jan. 20.

Ahead of leaving for the U.S. to participate in the Quad Summit, Modi said his visit will be an occasion to strengthen the strategic partnership with the United States, Japan and Australia.