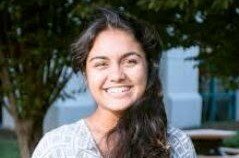 Charu Sharma, cofounder and president of Osana Salud, was named to the Forbes list in the category of Healthcare. (Twitter photo)

In Forbes’ ‘30 Under 30’ list for 2022, several Indian Americans have been named in the categories Venture Capital, Healthcare, Art & Style, and Social Media.

The list marks the 10th anniversary of the Forbes Under 30 class.

Following are the Indian Americans named in the above categories in the list released Dec. 1.

*Gaurav Ahuja, general partner of Thrive Capital, works double duty as both a partner at Thrive Capital and as founder and chairman of Imprint Payments, said Forbes. At Thrive, he focuses on fintech and SaaS across stages, serving as a board observer at LeafLink and as a board member at Check, dutchie, Parafin and Stytch. At Imprint, he incubated a fintech company that powers rewards cards for ecommerce brands; Imprint now has 50 employees and has raised $50 million from Thrive, Kleiner Perkins, Stripe and Affirm in just 12 months.

*Maitree Mervana, investor in Acrew Capital. Mervana is an investor at Acrew Capital, a multi-stage venture capital firm founded by a group of investors including Theresia Gouw with nearly $1 billion in assets under management. She co-leads the consumer thesis area and seed program at Acrew, and has led, co-led or supported investments in 25-plus companies, deploying more than $130 million of capital, Forbes noted.

*Vinny Pujji, managing partner at Left Lane Capital, is cofounder and managing partner at firm. He led seven of the firm’s 28 investments from its $630 million debut fund, serving on the boards of Truebill and Copado, said Forbes. He has deployed about $1 billion in capital across his career in 22 deals.

*Akilesh Bapu and Matthew Ko, cofounders of DeepScribe, have built an AI-powered medical scribe that automates clinical documentation for physicians, said Forbes. The software listens to patient conversations and its AI fills out the medical forms, enabling doctors to spend more time with patients than a computer screen.

*Neal Khosla, cofounder of Curai. Khosla’s startup Curai Health is using AI to help improve the scale and efficiency of virtual care delivery. The goal is to make primary care accessible to the uninsured, gig and minimum-wage workers by cutting costs for both in-person and telehealth businesses, said Forbes.

*Charu Sharma is cofounder and president of Osana Salud, which builds back-end infrastructure to digitize healthcare data for customers including healthcare providers, insurers and the pharmaceutical industry. It’s raised $26.5 million from investors and has a network of 6 million patients across Latin America, Spain and the U.S., according to Forbes.

*Shriya Srinivasan, a researcher at Massachusetts Institute of Technology, is developing better ways for human limbs to interact with prostheses through the use of brain-computer interfaces and tissue engineering. Her inventions enable patients to control their prosthesis and receive sensory feedback signals about how the prosthesis is moving and what it’s touching, according to Forbes.

*Prasanna Lachagari, design director at SDI Architecture, moved to Boston from Hyderabad to pursue a masters in architecture. She ended up staying in the city and has become the design director of local firm SDI Architecture and founding partner of SDI Design India, said Forbes. She’s currently working on a nonprofit to that provides steady income and stable jobs to locals in Kakinada, India.

*Aakash Sastry, cofounder of Itsme, has lofty ambitions for his new avatar-based social network, ItsMe, said Forbes. “We wanted to create a way to unlock connections around the world where you’d be able to be comfortable and confident meeting new people,” he told Forbes in April 2021. ItsMe has over 4 million registered users, who send 5 million-plus messages a day, added Forbes.