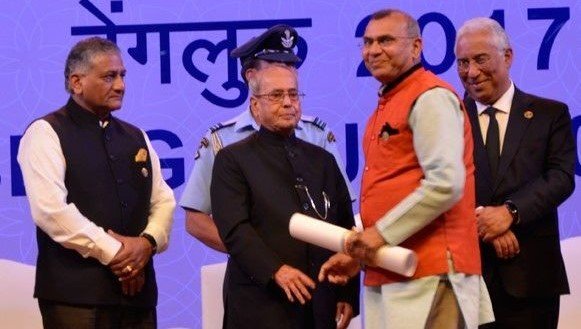 Indian American Ramesh Shah, who has been appointed chief executive officer of Ekal Abhiyan, in a file photo receiving the “Pravasi Bharatiya Samman Award” in January 2017 by the president of India, Pranab Mukherjee. (photo provided)

Shah takes over for Bajrang Bagra, who left to tackle another assignment of national importance, according to a news release.

Shah, the former president and chairman of Ekal-USA, has been unanimously appointed as the new CEO.

What makes this a historic moment is the fact that, he is the first Indian American who rose from a foot-soldier level to this distinctive honor, whose sole focus and establishment is not the U.S., but rural India, the news release notes.

Shah has been a founder member of Ekal-USA and is credited with building a modest one-teacher-school project, over three decades ago into a national brand in U.S. for selfless social work, with over 60 widespread chapters in U.S., Canada and beyond, his bio said.

“Rameshbhai will improve upon working of Ekal in fields of operational efficiency and organizational growth. He was my guide and supporter for all matters related to foreign chapters. Moreover, his we unmatched passion and long experience in serving the community in multiple sectors, including VHP and Ekal, has always been a great asset,” Bagra said of his successor.

Added Dr. Mahesh Mehta, former chairman of VHP of America: “I am excited and proud that Rameshbhai fulfilled the task he was entrusted with in such a monumental way.”

Coming from a humble rural background, Shah, with a degree in mechanical engineering and a brief stint as an engineer in an Indian industrial corporation, arrived in U.S. in 1970, with a dream to excel like all immigrants.

He subsequently obtained degrees in M.B.A. finance and M.A. in economics. When the national emergency was declared in India 1975, he actively participated in Indians for Democracy and Friends of India Society International that demanded the restoration of the Indian constitution.

He has been a lifelong Swayamsevak (volunteer) of H.S.S. While at V.H.P. of America, he took the responsibility of floating the Ekal Vidyalaya Foundation in 1988 and worked tirelessly and diligently to make it a great success, the bio said.

Over the years, Shah, with his dedication and tenacity has brought in numerous donors, volunteers and thinkers to Ekal fold and motivated diverse groups to join hands with Ekal. Besides Ekal, he is responsible for establishing the Gujarati Samaj of Houston and spearheading countless projects related to eyecare in India. During this entire community-centric journey, he was assisted by his wife Kokilaben, the bio said.

In January 2017, Shah was bestowed with the “Pravasi Bharatiya Samman Award” by the president of India, Pranab Mukherjee, the highest honor conferred on overseas Indians by the government of India in recognition of achievements, both in India and abroad.

Asked about his immediate goal, Shah said “First, I would like to bring in a lot more dedicated, committed young people to Ekal because they are the future of this organization.”

“Secondly, I believe that we have not yet explored the full potentials of all our chapter members. So, collectively, we need to find ways and means to bring their dormant skills to the surface and utilize them for everyone’s benefit,” he added.

The first event taking place under his watch is going to be the “Future of India’ gala of Nov. 13 which will be virtual and co-chaired by Kamlesh Shah and Mohan Wanchoo.