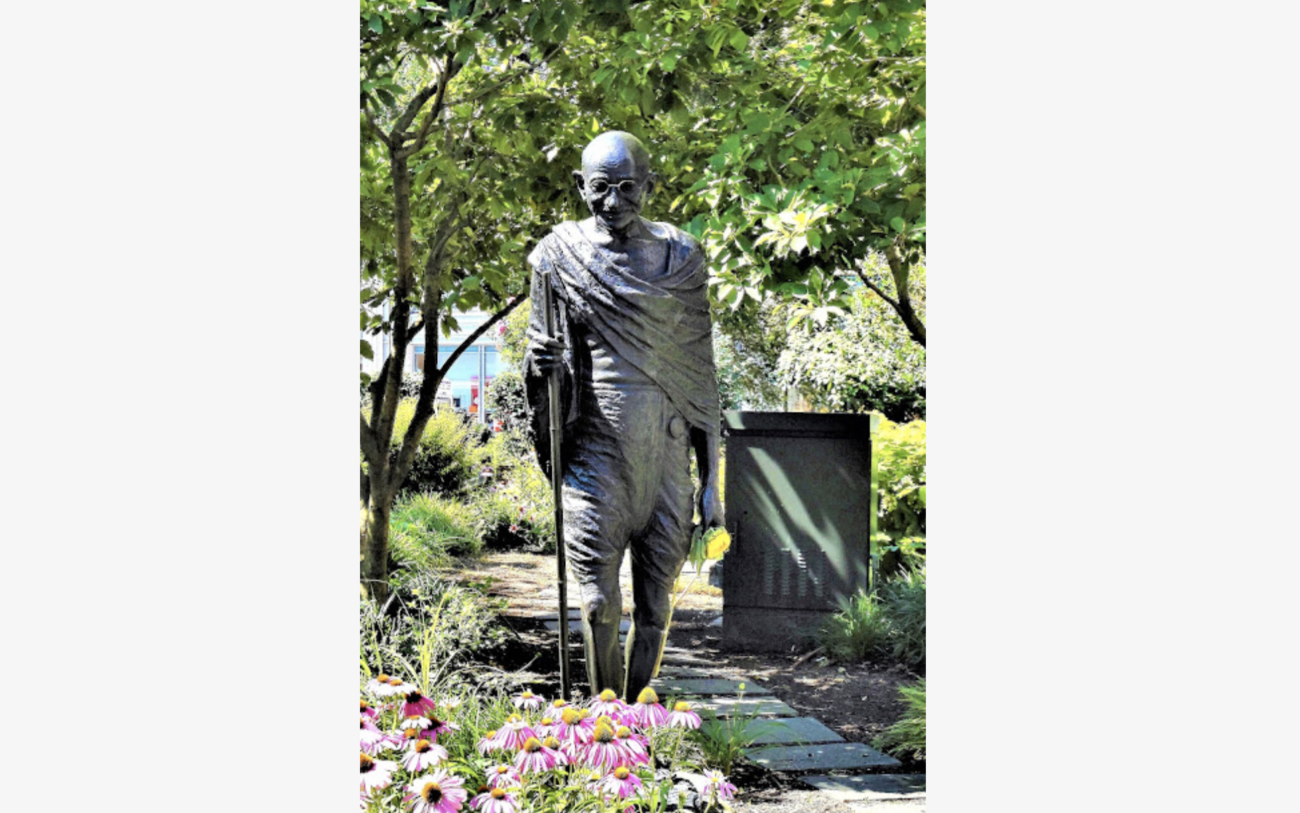 The NY statue was donated by the Gandhi Memorial International Foundation, and was dedicated on Oct. 2, 1986. (photo Tom Miller)
India-West Staff Reporter

The act has drawn strong condemnation from several quarters including from the Consulate General of India in NY. “The Consulate condemns this act of vandalism in the strongest terms.” it tweeted. “The matter has also been taken up with the US State Department for immediate investigation and urged appropriate action against those responsible for this despicable act,” it said.

The largest number of Gandhi statues outside India are in the US.

The NY statue was donated by the Gandhi Memorial International Foundation, and was dedicated on Oct. 2, 1986, to mark the 117th birth anniversary of Gandhiji. Civil rights leader Bayard Rustin had delivered a keynote speech at the ceremony. Incidentally, the statue was removed in 2001, conserved and reinstalled in a landscape garden area in 2002.

In a statement, Ajay Shah, convenor of the American Hindus Against Defamation (AHAD), said Gandhi and the freedom movement he spearheaded served as the inspiration for King and the American Civil Rights movement. “The MLK Memorial in Atlanta, GA has an area dedicated to Mahatma Gandhi. It is no coincidence that Gandhi’s statue was desecrated during the Black History Month. The perpetrators of this act and their sponsors are sending the message that they have not accepted peace, human rights, freedom and equality of all human beings,” Shah said.

The Global Organization of People of Indian Origin (GOPIO), wrote to the new mayor of New York City, Eric Adams, saying, “we Indian Americans are dismayed by the news that the statue of Mahatma Gandhi, Father of the Nation in India and an apostle of peace, at the Union Square Park was vandalized on Feb. 5. A few days earlier only we had paid tributes at the statue for his 73rd death anniversary as a martyr of India’s freedom and who had espoused peace and harmony among communities. This despicable act is not acceptable and the culprit must be apprehended and punished.” In calling for action against the perpetrators, GOPIO went on to point out the clout of the Indian American community, stating, “We are a major contributor to the economic growth of the city.”

It also drew pertinent attention stating, “We the Indian American community, numbering close to 5 million people, is deeply hurt by the disrespect shown to Mahatma Gandhi, especially when we are observing February as the Black History Month, celebrating the contribution of African American leaders including the late Rev. Martin Luther King who was inspired by Mahatma Gandhi’s nonviolent struggle against the British Empire to achieve freedom for India.”