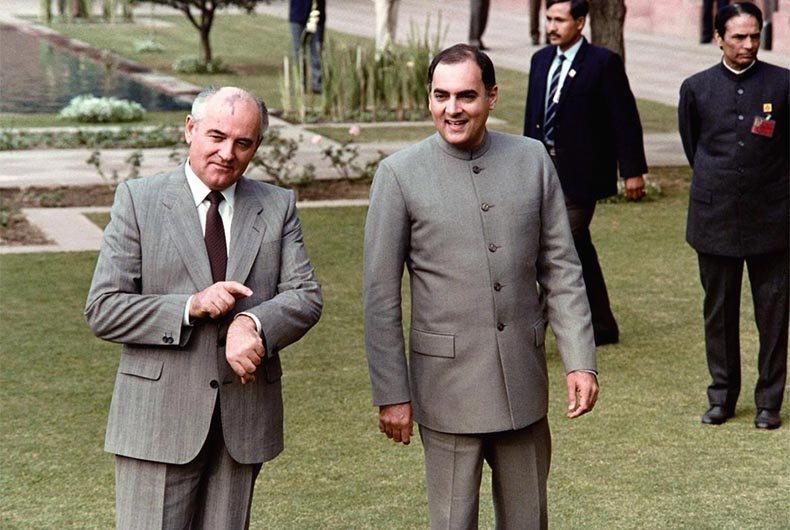 NEW DELHI- Rajiv Gandhi was Prime Minister then testing the political waters after his stint as a pilot soon after his mother Indira Gandhi’s brutal assassination in 1984 when she returned to power after the ignominy of emergency and Blue Star operation at the Golden Temple did her in.

Gorbachev was to become a legendary figure winning the Nobel Prize in 1990 for his efforts to end the cold war and ending the Space Race of missiles called Star Wars and terminating the fears of a nuclear war between the US and USSR.

Gorbachev and Rajiv Gandhi both criticized US arms control policies as the Soviet leader arrived to begin a four-day visit that was expected to test the limits of his new Asian initiative and the possibilities for deepening the three-decade-long Indian-Soviet relationship.

In his airport arrival remarks, Gorbachev signaled his intention to continue placing pressure on the US over nuclear arms issues. He referred to nuclear dangers or international tensions three times in his brief statement and picked up on the theme again at a state dinner, where he said his Iceland meeting with US President Ronald Reagan had brought into sharp focus both the potential for progress on nuclear issues and the obstacles.

Continuing to place the blame on Reagan for the failure of the Reykjavik talks, Gorbachev said: “The situation calls for a new approach to security issues, a new thinking in politics and a new philosophy in international relations.”

Rajiv Gandhi was more direct in his comments at tonight’s dinner, praising Gorbachev’s “constructive and bold” proposals at Reykjavik and saying it was “unfortunate that the Strategic Defense Initiative blocked agreement”.

Earlier that day, the two leaders held almost four hours of private talks with only interpreters present. Gorbachev’s visit to New Delhi was his first official trip to an Asian country and both governments have struck a theme of longstanding, trouble-free relations in the extensive preparations for the event. India has looked to the Soviet Union as a counterweight to the two neighbors with which it has fought wars — Pakistan and China — and as a ready market for manufactured goods and raw materials.

Moscow, in turn, has avoided the kind of heavy-handed presence that has seen close ties with countries from Egypt to Indonesia turn sour. In the process, it has gained the trust of one of the world’s most influential developing nations and a leader of the nonaligned movement and its support on scores of contentious international issues.

Rajiv Gandhi’s oft-expressed interest in modern technology, especially from the West, and a tentative revival of closer ties with the US are believed to have caused anxiety in the Kremlin, as has the prospect of continuing Indian surpluses in bilateral trade at a time of testing for the Soviet economy.

Officials and commentators here have raised warning flags in turn over Gorbachev’s attempts to revive Chinese-Soviet relations and to press ahead with his plan for an Asian-Pacific security accord.

In his remarks, Gandhi called Gorbachev’s July speech at Vladivostok “thought-provoking” but stopping well short of endorsing its approach to Asian affairs. Those potential differences generally were submerged today in a carefully arranged welcome that observers said was far more elaborate than that accorded any recent visiting dignitary.

Gorbachev, accompanied by his wife Raisa, was met at the airport by Rajiv Gandhi, his wife Sonia and a host of Indian cabinet members and elected officials.

The Soviet leader was accompanied by an unusually large retinue, including Deputy Prime Minister Vladimir Kamentsev, Foreign Minister Eduard Shevardnadze and Anatoliy Dobrynin, head of the Soviet Communist Party’s foreign affairs department. The inclusion of the armed forces chief of staff, Marshal Sergei Akhromeyev, in the delegation has raised speculation about new departures in the military relationship between the two countries.

India was to start receiving the advanced MiG29 and until recently officials had been playing down the possibility of further developments. Announcement of a US willingness to supply an airborne warning and control system (AWACS) to Pakistan, however, has raised a storm of protest and the Soviets have been quick to take advantage of the sentiment, raising the possibility of providing India with a new anti-AWACS capability that it is developing, according to press reports.

A virtual Delhi-Moscow shuttle had also led to speculation that several other agreements are in the works. A new accord leading to a vast expansion of bilateral trade, now totaling more than $4 billion annually, is expected as well as new consular agreements and the go-ahead for a Festival of India in the Soviet Union.

Rajiv Gandhi, in accord with other national leaders supporting nuclear disarmament, had been pressing the US and the Soviet Union on arms issues and the Soviet Union has issued several supportive statements. He and Gorbachev are likely to be on common ground on this issue, as well as in their opposition to SDI.

Gorbachev’s route on the 10-mile drive from the airport to the presidential palace where he was staying in central Delhi was lined with flag-waving schoolchildren and thousands of people bused into the city from adjacent states. Television coverage was marked by effusive commentary on the Soviet leader and Indian-Soviet relations.

Posters of Rajiv Gandhi and the Gorbachev lined almost every major road in New Delhi as do flags of the two countries.

Extra-heavy security also was evident, with police lining the entire route. Several Afghan exiles living in Delhi had been ordered to stay in their homes during the visit in an attempt to bar the kind of anti-Soviet demonstrations that marked the 1980 visit of Leonid Brezhnev.