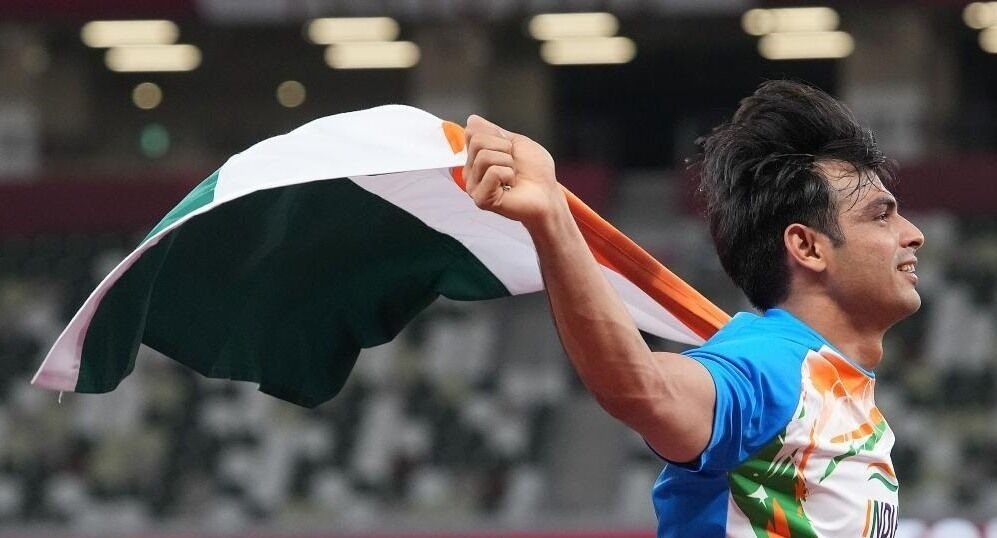 Neeraj Chopra Aug. 7 made history by becoming the first Indian to win gold medal in athletics at the Olympic Games when he clinched first position at Tokyo 2020 with a throw of 87.58 metres in javelin competition. (photo via IANS)

TOKYO (IANS) — Neeraj Chopra Aug. 7 made history by becoming the first Indian to win gold medal in athletics at the Olympic Games when he clinched first position at Tokyo 2020 with a throw of 87.58 metres in javelin competition.

Chopra has also become only the second Indian after Abhinav Bindra to win an individual gold medal at the Olympics. Bindra had won gold at the 2008 Olympics in shooting.

“Yes, I was aware that India had never won a medal in athletics, nor has it won gold medal in Tokyo till that time. My event was the last one and there was pressure. But when I am on the runway for my throw, my focus is always on my next throw and I don’t think of other things. So, I concentrated on my performance, tried my best and I am happy that I managed to win the first gold medal in athletics and also first gold medal in Tokyo,” Chopra told a virtual press conference organized by the Athletics Federation of India (AFI) on Saturday.

Chopra said he did not feel much pressure of participating in the Olympics as he has been participating against the same athletes for years and therefore was comfortable looking at familiar faces.

“The 3-4 international events that I participated in, during my stay in Europe before the Olympics were very crucial for me as they gave me the confidence,” said Chopra, who thanked AFI, Sports Authority of India and the Sports Ministry for making arrangements for his tour of Europe that helped him win the gold medal.

The 23-year-old Chopra now holds gold medals in javelin throws at the Commonwealth Games, Asian Games and Olympics, all at the same time.

Chopra’s gold means India, with seven medals at Tokyo Games, have surpassed the tally of six medals won at 2012 London Olympics. This is the biggest tally of medals won by India in a single edition of Olympics.

After finishing first in the qualification round Aug. 4 with a throw of 86.59m, Chopra continued his impressive performance in the final on Saturday, recording a first throw of 87.03m.

He followed it up with 87.58m in his second attempt. It turned out to be the best throw of the night.

The 23-year-old’s third attempt was well below the 80m mark at 76.39m. He followed it up with two fouls on his fourth and fifth throws. His last attempt was 84.24m. By then, however, the inevitable was confirmed as the other competitors couldn’t match his best throw.

Tributes poured in from politicians and Bollywood stars.