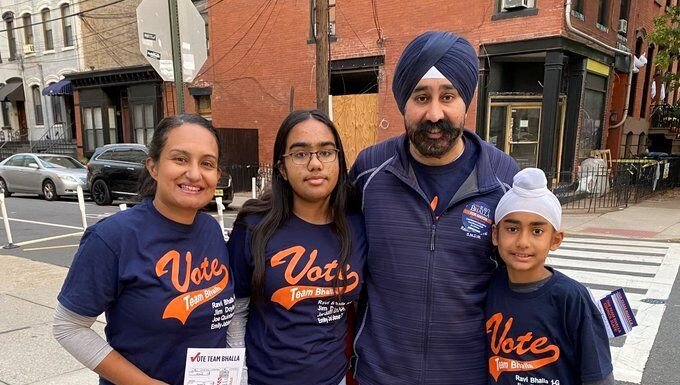 Bhalla holds the distinction of being the first Sikh American directly elected to office in New Jersey. He served three terms on the Hoboken City Council, and then emerged victorious in 2017 from a crowded ticket of six others running for the mayor’s seat. Bhalla clinched his victory that year by earning the endorsement of former Mayor Dawn Zimmer.

The town of Hoboken, across the river from Manhattan, New York, is exactly one square mile with 55,000 residents. One of the area’s greatest concerns is damage from flooding: 79 percent of Hoboken’s residents fall into FEMA’s new “coastal high hazard” zone.

When Bhalla served on the city council, he helped Hoboken acquire eight acres of additional green space, some through eminent domain. Through a novel scheme, the city incorporated storm water collection tanks underneath the park which store up to 500 million gallons of water.

The water is pumped off the street during flooding and stored in the tanks until it is treated properly, then discharged into the nearby Hudson River, Bhalla told India-West in a 2017 interview. “We have made the city more resilient against flooding.”

The League of Conservation Voters congratulated the Indian American mayor on his re-election. “Congratulations to Ravi Bhalla, for your victory as Hoboken Mayor! We’re looking forward to working with you to protect the health and wellbeing of your community,” wrote the LCV in a tweet.

In a statement forwarded to India-West after his win, Bhalla thanked the residents of Hoboken for supporting him and his slate. “Serving as your mayor has been the honor of a lifetime, and I look forward to another four years of building on the progress we’ve made together.”

“The future is bright for Hoboken. We look forward to what’s ahead, and to representing you with integrity, honesty and hard work,” wrote Bhalla.

The mayor has lived in Hoboken since 2000, with his wife Navneet, a human rights lawyer, and their two children, Arza and Shabegh.