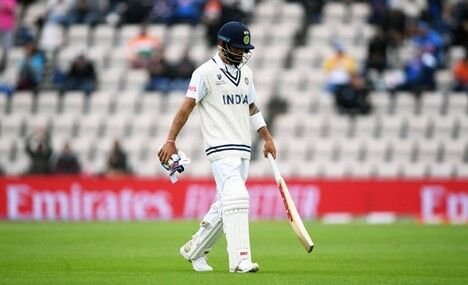 Indian Skipper Virat Kohli walks back to the pavilion after being dismissed for LBW during the third day of the World Test Championship final match between New Zealand and India, at the Rose Bowl in Southampton on June 20. (ANI photo)

SOUTHAMPTON (IANS) – The International Cricket Council was left red-faced and under fire from former cricketers after the inaugural World Test Championship final fell prey to inclement weather with two of the first four days getting washed out and the other two days not seeing full days’ play due to disruptions from bad light.

With just two days left – including the reserve day on June 23 – a draw looks the best possibility for a result although a flurry of wickets could still see a result in either team’s favor. The rules suggest both teams will be joint winners if the match ends in a draw or a tie. It is something that may not go down well with both teams.

Indian skipper Virat Kohli looked angry after play was stopped due to bad light on multiple occasions in the second half of the second day’s play.

Former England cricketer, Kevin Pietersen tweeted his disappointment saying that the final should have been held in Dubai.

“It pains me to say it, but a ONE-OFF & incredibly important cricket game should NOT be played in the UK,” Pietersen tweeted.

“If it was up to me, Dubai would always host a one-off match like this WTC game. Neutral venue, fabulous stadium, guaranteed weather, excellent training facilities and a travel hub! Oh, and ICC home is next to the stadium,” Pietersen added in the tweet.

The ICC, which followed a neutral venue policy, had picked England as the venue for final.

Initially, the plan was to host the final at Lord’s but due to the convenience of having the Hilton Hotel on-site in Southampton’s Hampshire Bowl, suitable for bio-bubble, the match was shifted here.

However, the ICC could not take rain into account.

“It’s very sad for the fans. I think ICC did not get the rules right. All said and done, you want a champion,” he said.

“With so much time available, I am sure they could have at least allowed 90 overs in 5 days to complete 450 overs. That is something I would have expected from ICC. We were excited that there is a reserve day but I am not sure whether the game can finish [on the reserve day] if the rain continues,” he added.

“I am with VVS, however long it takes, I would like to see 450 overs and one team come out on top,” Bond said.

When play ended, due to poor visibility, on Sunday, New Zealand were 101 for two wickets, replying to India’s first innings’ 217. Captain Kane Williamson was batting on 12 (37 balls, 1×4) while Ross Taylor was yet to open his account.

In-form Devon Conway was out for a fine 54 (222 minutes, 153 balls, 6x4s), just moments before the umpires decided that the light was not good enough for play.