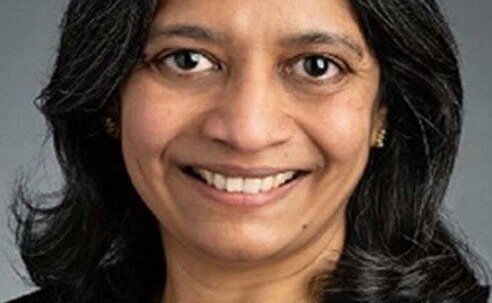 Nita Patel has been elected president of the IEEE Computer Society for 2023. (computer.org photo)

The IEEE Computer Society announced Sept. 20 that Nita Patel, P.E, senior director at the Engineering Lead Design Center-Farmington at Otis; an IEEE Foundation director; and a mentor for several IEEE Women in Engineering summits, has been elected president of the society for 2023.

The Indian American engineer is active with multiple IEEE CS committees, the IEEE Industry Engagement Committee, several IEEE Women in Engineering committees, and the IEEE New Hampshire executive committee, according to a press release. She will serve as the 2023 IEEE CS president for a one-year term beginning Jan. 1, 2023. The president oversees IEEE CS programs and operations.

Patel garnered 3,277 votes, compared with 1,791 votes cast for Dimitrios Serpanos, who is a professor at the University of Patras and the president of the Computer Technology Institute, Greece, added the release.

Patel leads a critical part of Otis’ global engineering development, providing a wide range of new product capabilities in connected, smart, IoT-based platforms. She was previously with L3Harris where she was senior director, engineering, and led multi-disciplinary, embedded-software design teams in innovative research and new product development, for which she was recognized for significant technical contributions as 2014 L3 Engineer of the Year and 2011 New Hampshire Engineer of the Year.

Patel has served as 1st vice president of the Computer Society, served a three-year term on the Computer Society Board of Governors, founded and led the first five years of the IEEE Women in Engineering International Leadership Conference, served as Women in Engineering International Chair for which she received the 2014 Larry K Wilson Transnational Award for distinguished contributions to IEEE global activities, served on the Eta Kappa Nu Board of Governors and was IEEE-USA VP of Communications and Public Awareness, according to the release.

Outside of IEEE, she is an active leader within Toastmasters International and the United States Chess Federation.

Patel received her MS degree in computer engineering, BS in electrical engineering and BS in mathematics from Southern Methodist University in Dallas.

Patel noted in her campaign statement that she plans to focus on the following: Nurturing membership growth through conferences, standards and services; Providing access to critical technology to our members through leading publications, continuing education, and energized Technical Communities; Optimizing chapter activities worldwide to expand and strengthen communities within the Computer Society by sharing best practices, by encouraging opportunities to get involved and by developing future leaders; and Increasing volunteer impact by evaluating our tools, processes, and services to make them as simple, relevant and accessible as possible, by developing student and early-career professionals and by expanding the inclusiveness of our volunteer teams.

In other news, Saurabh Bagchi of Purdue University was elected a member of the Board of Governors.