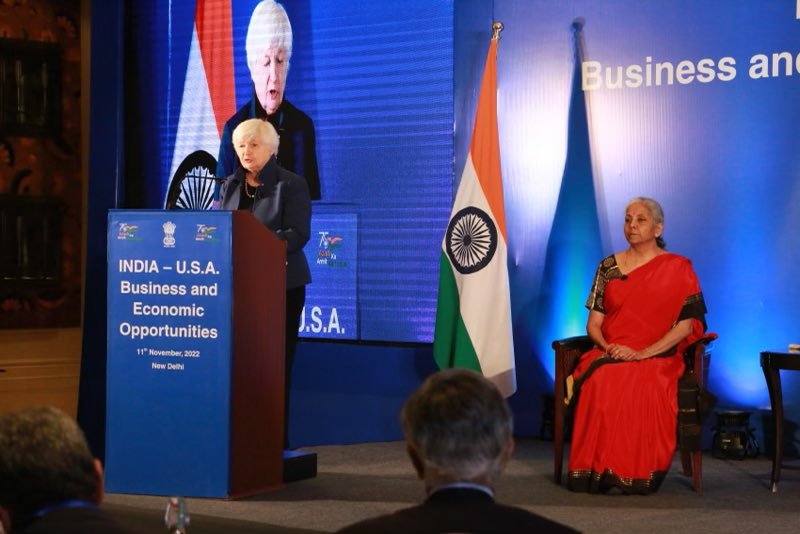 NEW DELHI (ANI) – Ahead of India’s G20 Presidency which is set to begin on December 1, US Treasury Secretary, Janet Yellen on November 11 said that New Delhi is a “natural ally” and stressed that India’s G20 year is a chance to accelerate global coordination on debt restructuring.

Highlighting the growth in US-India economic ties, she said, “The US and India are ‘natural allies,’ in the words of a former Indian prime minister. We may be located across the world from each other, but what unites us is far greater than any of our differences. Our fights for independence were born of the same desire for freedom and dignity.”

Speaking about US companies moving their business operations – be it back-office, manufacturing, or R&D, to “friendly” countries, Yellen emphasized supply chains and deepening global integration with trusted partners like ‘India’ and said that the US is pursuing an approach called ” friend shoring.”

“The United States is pursuing an approach called ‘friend shoring’ to diversify away from countries that present geopolitical and security risks to our supply chain. To do so, we are proactively deepening economic integration with trusted trading partners like India. Our strategy will also create redundancies in our supply chain to mitigate over-concentration risks. And we are also addressing our reliance on manufacturers whose approaches clash with our human rights values. To be very clear, ‘friend shoring’ is not limited to an exclusive club of countries. We seek integration with the large group of countries that we can count on – developing countries and advanced economies alike. In fact, part of our ‘friend shoring’ approach involves partnering with developing countries to grow local industries and connect them to the global supply chain.

She gave the example of a development finance institution, America’s largest solar manufacturer which is providing $500 million in debt financing to build a facility in Tamil Nadu in India.

“This facility will boost India’s solar manufacturing capacity. At the same time, it will help diversify supply chains away from China, which currently dominates over 80 percent of global solar panel production”, she added.

“We are already seeing progress. New supply chains are developing across regions from Asia to the European Union. We are also seeing signs that Western firms are diversifying their supply chains beyond China. Technology companies like Amazon and Google are investing in India and Vietnam. Apple recently announced that it was shifting some iPhone manufacturing from China to India,” said the Secretary.