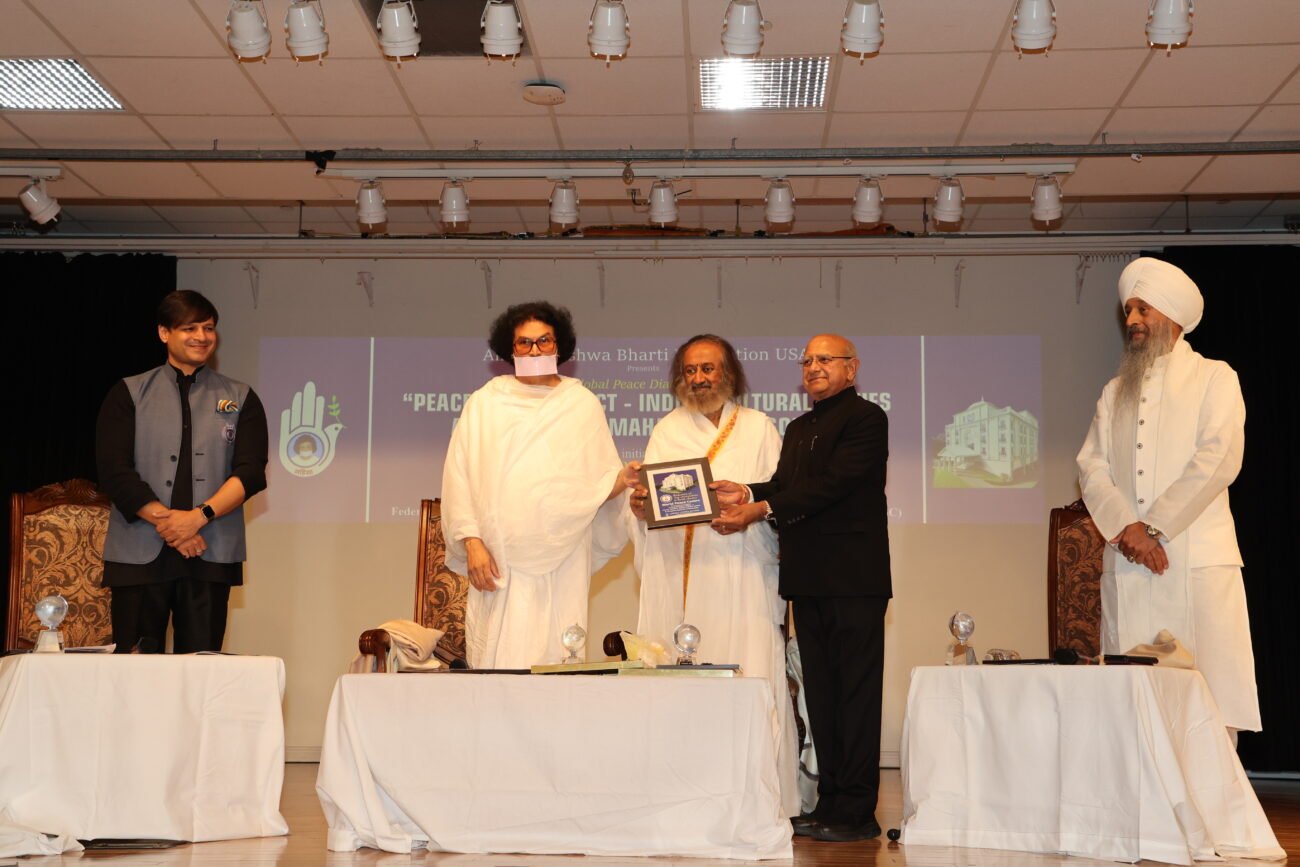 BUENA PARK, CA – In the wake of the Russian invasion of Ukraine and the mass shooting incidents in the US, prominent Indian spiritual leaders gathered here at the Jain Center of Southern California on June 4 and discussed a ‘global peace dialog’ aimed at resolving world conflicts through the age-old tradition of Indian cultural and moral values.

Philanthropist and well-known actor Vivek Oberoi, fluent in English and Hindi, moderated the session, wowing the audience with his star power of course, but also his deep compassion and sincerity.

Introduced by Mahesh Wadher, former president of JAINA (Federation of Jain Associations in North America) and sponsor of the event, Vivek Oberoi, it was informed, had a stellar record of community service: he is a Goodwill Ambassador for Habitat for Humanity, the WHO, and the UN and actively helps organizations aiding cancer-afflicted children, rescuing girls from prostitution, aiding poor children with heart conditions, building affordable homes, universities, etc. An awed Wadher summed it up, “While he may play several characters in films, he really is a world hero. I am honored to welcome someone of his caliber.”

Oberoi set things in context saying, “There are two kinds of people in the world, those who can help and those who need help. It has nothing to do with money, status, religion. Imagine you are in an accident, whoever gives you the CPR is the angel. Seva is the most important thing.”

He was also laudatory of the Acharya saying, “Lokeshji has incredible energy; if we tapped this instead of solar energy, the world power crisis will be over. He channels that entire energy toward world peace.”

The Jain leader is working to establish Ahimsa Vishwa Bharti, India’s first World Peace Center in Gurugram, and said the current rampant conflict situations could be avoided if the tolerant and inclusive Indian culture can be made the world culture. The root cause, he said, needs to be addressed in the education system where the need is to shift to a value-based one. This, the upcoming center will be focusing on.

The bonhomie between him and Sri Sri Ravi Shankar was apparent, with each referencing the work of the other. The AOL leader has been traveling the globe spreading the message of peace and he posited that it began with the individual.  He advised that when we voice the simple statement, ‘I stand for peace,’ that which is hidden deep inside comes to the fore and affects the way we are in the world and will in turn have positive repercussions on global conditions.

Satpal Singh Khalsa,  Ambassador of Sikh Dharma  in the US too advised that everyone work on inner peace. “There is a big difference between being a human being and being human. Purpose of religion is not to send each of us to heaven but discover the heaven within,” he said.

Inspired by the proceedings, a pledge of $100,000 for the peace center from Dr. Anil & Preeti Shah was announced. Among other donors was the Sarva Mangal Trust.

Others who spoke at the event include Yogesh Shah, President of JCSC and Nitin Shah who detailed the construction and work of the beautiful center.