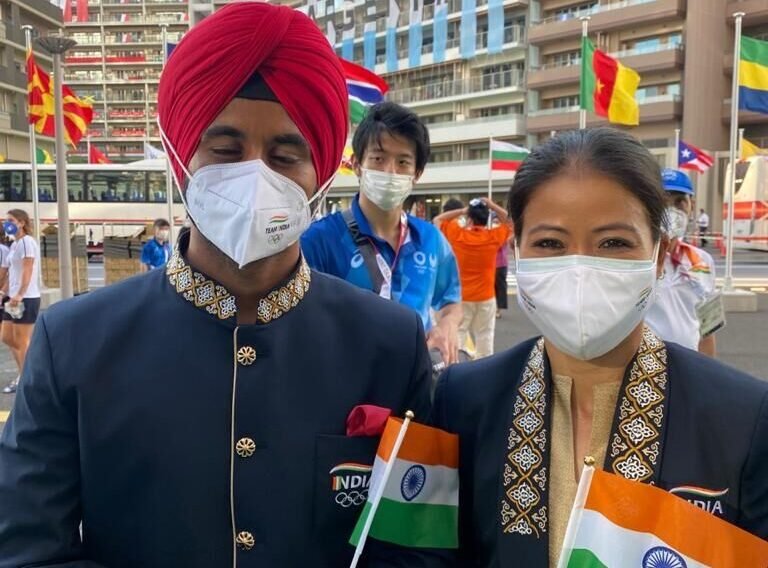 The scratch mixed team pair of Deepika Kumari and Pravin Jadhav will start the campaign with the first elimination round match in archery against the Chinese Taipei pair of Lin Chia-en and Tang Chih-Chun.

Deepika was to team up with her husband Atanu Das for this event. They had a successful outing in Paris earlier this month when they won the mixed team title in the World Cup Stage 3.

With Das struggling to put up a good score in the men’s ranking round on July 23, Jadhav turned out to be the best Indian archer on Friday and thus got a chance to pair up with Deepika.

This gives Das a couple of days time to cool his nerves and come up with an improved performance in the men’s team event and individual rounds. Getting a chance to pair up with a senior archer like Deepika, who is participating in her third Olympics, will be a boost for Jadhav’s morale.

India’s best medal hopes on July 24 will be in shooting and weightlifting.

If everything goes as per the script, India’s first medal should come from the women’s 10m air rifle event. Apurvi Chandela and Elavenil Valarivan will be going into the 10m air rifle qualification round high on confidence as they have had good performances in the last couple of years.

The experienced Apurvi and the young world No. 1 Elavenil will be up against an extremely tough field, as they look to make it to the top-eight finals field from among 49 shooters in the qualification round. Apurvi has had scores of 633 in competitions while Elavenil has shot 632.7 out of a possible 654 in the qualification round and if they replicate scores, they should be in the final.

Young shooters Saurabh Chaudhary and Abhishek Verma will present India’s challenge in the men’s 10m air pistol event. They have been the best pistol shooters in the world over the past three years, but the much narrower 36-man field here is fraught with danger, simply because of the presence of some legends of pistol shooting, led by Korean Jongoh Jin.

Mirabai Chanu, India’s lone weightlifter here, is ranked No 1 in the list of Tokyo qualifiers on the basis of her consistent performance recently. She will start as a medal contender in the women’s 49 kg, having set a new world record in clean & jerk by lifting 119kg in the Asian Weightlifting Championship at Tashkent in April 2021.

Chinese weightlifter Jiang Huihua is the favorite in this category but Mirabai had topped her performance in April.

Table tennis players Achanta Sharath Kamal and Manika Batra will start their campaign in mixed doubles with a first-round encounter against Lin Yun Ju/Cheng I Ching of Taiwan. Manika and Sutirtha Mukherjee will also launch their challenge in women’s singles.

Sumit Nagal will go against Uzbekistan’s Denis Istomin in the men’s singles first round while judoka Sushila Devi takes part in the women’s 48kg elimination round.

Rowers Arjun Lal Jat and Arvind Singh will launch their boat in the men’s lightweight double scull event in the heats on Saturday, hoping to make it to the finals. In case they fail to make it, they will at least hope to make it to Sunday’s repechage races.

Led by six-time world champion and London Olympic bronze medalist boxer MC Mary Kom and men’s hockey team captain Manpreet Singh, the Indian contingent made a subdued entry, as the 21st group in the march past, with less than 30 representing the full contingent of over 200.

There was no cheering, screaming, and clapping by the huge crowd that usually fills the stadium for ceremonies of this magnitude and stature because the fans are banned from the entire Olympics. However, the athletes did not seem to mind as they got ready to represent their respective countries.