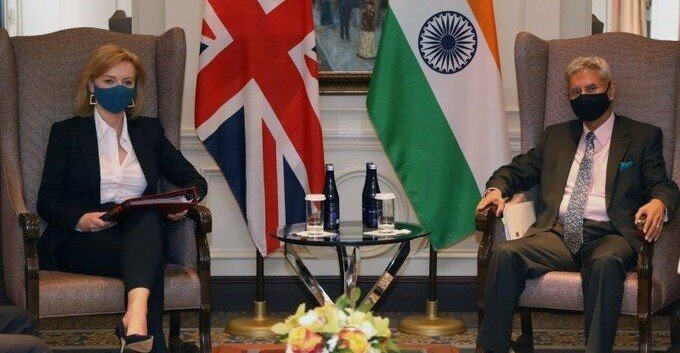 UNITED NATIONS — India’s External Affairs Minister S. Jaishankar has raised with the UK Foreign Secretary Elizabeth Truss her country’s rules that require vaccinated Indian travelers to be quarantined and urged an early resolution of the issue.

“Urged early resolution of quarantine issue in mutual interest,” he tweeted after meeting Truss in New York Sept. 20 as he began holding bilateral meetings with leaders from around the world.

Under new British rules unveiled last week, Indians who have received two shots of the Covishield jab will be treated as unvaccinated and have to quarantine themselves for 10 days, even though the vaccine is the same as the AstraZeneca vaccine developed by Oxford University but manufactured in India and in use in many Western countries like Canada.

Travelers from several countries who have received the AstraZeneca vaccine are allowed into the UK without having to quarantine if they meet certain conditions, but not Indians, in a move that is seen as discriminatory.

The British side is yet to comment on the meeting between Jaishankar and Truss.

This was Jaishankar’s first meeting with Truss after she took over as foreign secretary from Dominic Raab last week.

Jaishankar tweeted that they had discussed the progress of Roadmap 2030, an ambitious, decade-long plan to strengthen India-UK ties in areas ranging from defense cooperation and technology to climate change and investment.

He said that they exchanged views on Afghanistan, which has been taken over by the Taliban, upsetting the security situation in the region and the Indo-Pacific.

Last week Australia, the UK and the U.S. announced a security pact, AUKUS, that would impact the Indo-Pacific region where India, the U.S., Australia and Japan are coordinating their strategies to counter China.

Truss was the UK’s International Trade Secretary before moving to the Foreign Office and Jaishankar said in his tweet that he “appreciated” her efforts in the trade sector.

In her previous post, Truss had overseen consultation on a free trade agreement between the two countries.

Jaishankar arrived in New York on Sept. 20 for a heavy round of diplomacy during the High Level Week of the UN General Assembly when leaders from around the world gather.

AP adds from New Delhi: India Sept. 21 criticized the British government’s decision not to recognize coronavirus vaccine certificates issued by Indian authorities, calling it a “discriminatory policy” that will impact its citizens who want to travel to that country.

The new rules require Indians visiting the U.K. to quarantine themselves for 10 days and undergo COVID-19 tests even if they are fully vaccinated with the Indian-made AstraZeneca vaccine, Covishield.

“Here is a vaccine, Covishield, which is a licensed product of a U.K. company, manufactured in India, of which we have supplied 5 million doses to the U.K. at the request of the government of the U.K. We understand that this has been used in the national health system and therefore, non-recognition of Covishield is a discriminatory policy,” Shringla told reporters.

The new rules, which also require people arriving from many other countries to undergo quarantine, have sparked anger in India.

On Sept. 20, a leader of the main opposition Congress party, Shashi Tharoor, said he has canceled an upcoming book tour of Britain in protest and accused the U.K. government of “double standards.”

Another lawmaker, Jairam Ramesh, said the decision “smacks of racism.”