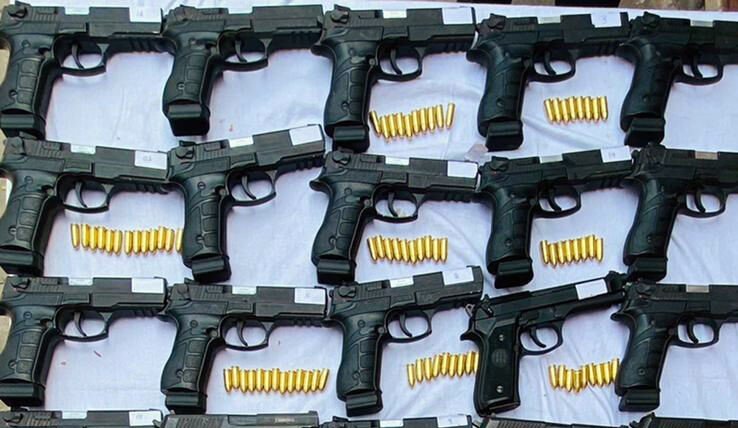 Punjab Police seized a huge cache of foreign-made pistols and arrested a weapon smuggler allegedly linked with Pakistan-based terror outfits and anti-India pro-Khalistani elements based in the U.S., Canada and the UK, and operating allegedly on directions of a U.S.-based handler, in Chandigarh on June 11, 2021. (ANI photo)

WASHINGTON – The Indian government has provided the United States considerable evidence of links between U.S.-based Khalistan groups and militants and terrorists operating in India but Washington has been largely “unresponsive,” says a report by a top American think tank which also noted that cooperation between Khalistani and Kashmiri groups has become increasingly apparent in North America, the United Kingdom, and Europe.

In a report titled, “Pakistan’s Destabilization Playbook: Khalistani Activism Within the U.S,” the Hudson Institute said that “perhaps the most worrisome aspect of U.S.-based Khalistan agitation is the likelihood that Pakistan’s intelligence agency is responsible to a considerable degree.” The report says there is recent increase in “Khalistan-related anti-India activism within the U.S.” and that the likelihood of Khalistan groups receiving funding, support, and military training from Pakistan is also substantive.

The report calls for action by the U.S. government in respect to Khalistan groups and says that all groups responsible for terrorist attacks in India should be included in its list of designated global terrorist groups.

The report notes that New Delhi has made appeal for action against such groups.

“Unfortunately, the United States government has shown no interest in violence committed by Khalistan activists, even though the Khalistan campaign’s most ardent supporters are located in western countries such as the United Kingdom, Canada, and the United States. Despite urgent Indian requests to these countries to curb Khalistan separatist groups within their borders, their governments have remained unresponsive to India’s appeals,” the report said.

“Making these demurrals all the more puzzling is the increasing involvement over the last decade of Khalistani groups with Pakistan’s so-called Kashmiri groups, who have also become the focus of American intelligence and policy communities,” it added.

The report has been prepared by a study group that includes Dr. Aparna Pande, director of the Initiative on the Future of India and South Asia; and Husain Haqqani, director for South and Central Asia.

The report said that “cooperation between Khalistani and Kashmiri groups has become increasingly apparent in North America, the United Kingdom, and Europe, with Kashmiri and Khalistani activists often operating in tandem,” and noted that joint protests of Khalistani and Kashmiri separatists have occurred in Washington, DC, Houston, Ottawa, London, Brussels, Geneva, and other European capitals.

“Importantly, the recent increase in Khalistan-related anti-India activism within the U.S. is occurring as the United States and India are collaborating to confront the rise of China, especially in the Indo-Pacific. Pakistan is a critical Chinese ally and therefore has a vested interest in weakening this India-U.S. collaboration,” the report said.

It noted that campaigns such as the one for Khalistan could also serve to distract Washington and New Delhi from strengthening the Quad (Australia, India, Japan, U.S.) partnership.

“Acknowledging the strategic objective of mobilizing the peer rivals of the U.S. and their primary South Asian ally against India, one of the most active Khalistan separatist groups in the U.S. recently published open letters to the leaders of Russia, China, and Pakistan requesting their support,” it said.

“The Indian government has provided the U.S. government considerable evidence of links between U.S.-based Khalistan groups and militants and terrorists operating in India. The likelihood of Khalistan groups receiving funding, support, and military training from Pakistan is also substantive. The U.S. should therefore take India’s concerns seriously and dedicate the requisite intelligence and law enforcement resources to help India address these concerns,” the report added.

It suggested a six-point action to the U.S. government with respect to Khalistan groups.

“Include all groups responsible for terrorist attacks in India in its list of designated global terrorist groups; designate as terrorists the various individuals that India and U.S. intelligence and law enforcement have established as being connected to designated terrorist entities; apply terror financing laws and regulations to the various groups espousing Kashmiri and Khalistan separatism,” it said.

The Hudson Institute report noted that the U.S. government cannot afford to allow separatist movements from India, including those with ties to militant and terrorist groups, to grow unchecked among its otherwise law-biding Sikh community.

“Its experience with Islamist extremist groups must serve as a template for dealing with Khalistan extremists, and so recruitment or fundraising for militancy or “martyrdom” must not be allowed on U.S. soil, even if the actual acts of violence are to take place far away, in India. U.S. authorities must not let ostensibly peaceful pro-Khalistan activism become the precursor of a new wave of violence in India’s Punjab state,” it warned.