HomeSportsIndia Moves to 120-3 against New Zealand in WTC Final

India Moves to 120-3 against New Zealand in WTC Final 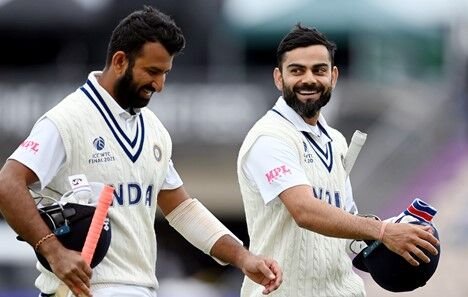 India Moves to 120-3 against New Zealand in WTC Final

Indian skipper Virat Kohli and India’s Cheteshwar Pujara during the second day of the World Test Championship final match between New Zealand and India, at the Rose Bowl in Southampton on June 19. (ANI photo/ICC Twitter)

Captain Virat Kohli was unbeaten on 35 and Ajinkya Rahane was not out on 13 as India moved to 120-3 before early tea was taken due to bad light.

After the first day’s play was washed out due to rain, the inclement weather encouraged New Zealand skipper Kane Williamson to field first after winning the toss with five fast bowlers chosen in the playing XI.

Kohli survived a caught behind down the leg side against Trent Boult as on field umpire Richard Illingworth believed the Indian skipper had edged the ball and referred it to the TV umpire for a review whether wicketkeeper B.J Watling had caught the ball cleanly.

However, television replays clearly suggested the ball didn’t make any contact with Kohli’s bat despite Watling catching the ball cleanly.

After losing both openers in the opening session, India lost Cheteshwar Pujara (8) in the mid-session against some lively swing bowling by all five seamers. Pujara struggled for 35 balls to get off the mark before he finally square drove Neil Wagner to point boundary for his first runs.

But Boult was successful in his return spell when he had Pujara trapped leg before wicket with a sharp inswinger.

Earlier, the opening pair of Rohit Sharma (34) and Shubman Gill (28) won the early battle against the swing of Tim Southee and Boult, adding 62 runs before both fell in the space of one run in an eventful last half hour before lunch.

Sharma looked to have settled down well and played two elegant backfoot cover-driven boundaries against Colin de Grandhomme, who surprisingly bowled ahead of Wagner.

Kyle Jamiesen finally induced a thick outside edge of Sharma as Southee pounced onto a two-handed low catch in the third slip to give New Zealand a breakthrough.

Wagner lived up to his reputation of picking up wickets early as the left-arm swing bowler found the outside edge of Gill’s bat in his first over to give the Black Caps double delight in the first session.

Wicketkeeper-batsman Watling will be playing in his last test match as he had announced his retirement from test cricket.

“Really great occasion for him to play his last game, and I’m sure he’ll enjoy it,” Williamson said at the toss.

Kohli said he would have bowled first, too, had he won the toss, but he was happy to bat.

“Big final,” he said. “(Put) runs on the board and it’s always a bit of an advantage. The two spinners can bowl in any conditions and if there’s a bit of dampness, they’re really accurate and can make use of it as well.”

If the outcome is a draw, the trophy will be shared.

India players wore black armbands in memory of the country’s celebrated sprinter Milkha Singh, who died at age 91 late Friday night because of complications of COVID-19.